If you remember back to Retro Week, I covered an early version of Carmageddon. In this review, I made reference to the remake that was released a couple of years ago. I think it’s about time that I covered the remake in a lot more detail. There are a few reasons for this. One is because I wanted to test the remake some more. The other is to clear up a little bit of confusion.

The remake to Carmageddon was initially released under the name Carmageddon: Reincarnation, though if you were to look for that title in Steam you will no longer find it. A few people have asked what happened to it, but the question does not always get answered. I can tell you that answer now. The branding got changed to Carmageddon: Max Damage and development continued under this name. Having both versions in my Steam library, I can confirm that Max Damage is an evolution of the Reincarnation game.

Now that we’ve got that out of the way, I think it’s time to dust it off and give it some more play time.

As you would expect, the remake is very similar to the original game. The basic principle when you’re running in single-player is that you’re in a race with up to 5 other vehicles. This race involves a mix of demolition derby while also mowing down as many pedestrians as you can.

This description does not do justice to the graphic nature of the game. Like the original, this is not really a game intended for children. The concept of running over Granny in her walker is really intended for an audience that is mature enough to understand that this is really only for entertainment.

The maps are very heavily laden with power ups. These can add to the graphic nature of the game, as well as a certain amount of silliness. It is a lot of fun just to experiment with them just to see what they all do. The maps are all based on the original game.

I did have one slight disappointment which I initially felt with the Carmageddon: Reincarnation and is st ill here in with Max Damage. That is to do with multiplayer. Don’t get me wrong, Multiplayer is relatively straightforward to set up and now that you have the benefits of integrating with Steam, it’s really nicely done. When you play multiplayer though, you lose the ability to mow down pedestrians. In multiplayer, the game basically becomes one massive Demolition Derby. I seem to recall from the original Reincarnation this was due to network latency and bandwidth usage, although they were aiming for a solution. It’s annoying they haven’t come up with one yet, as that’s a big part of what makes single-player fun. Other games, such as the GTA series, seem to have worked out similar things with their NPC characters so it has been done before. 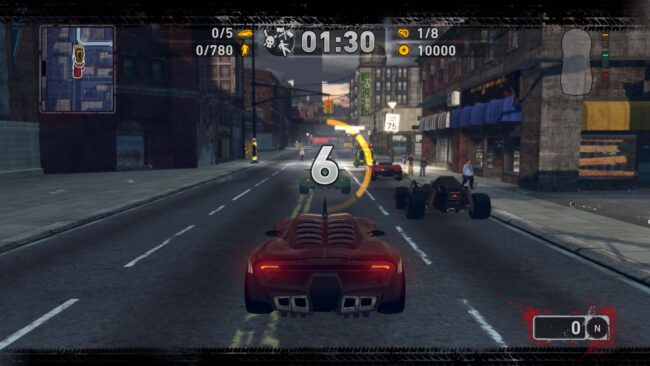 Even though this game is now a few years old, the graphics are still phenomenal. The remake of the game is worlds apart from the original.

Of course, the original was released at a time when 3D Acceleration on the PC platform was becoming a bit of a mess. As mentioned in my review of the original, it is apparent that compromises had to be made to make sure the game ran well on the various different standards of the day.

We don’t really have to deal with that now. While there are a few different standards to worry about (eg. DirectX, OpenGL), the fact we have standards now means developing for all the different hardware is far more streamlined. In the context of Carmageddon, this means we are now able to have some very decent graphics at some reasonable resolutions. The bottom line is that, if I didn’t tell you this game was a few years old now, you probably wouldn’t notice. The remake could very easily pass for a far more modern game even though it is now a few years old.

This game is a very well done remake of the original. If you were a fan of the original game, there’s definitely a lot of fun to be have with this remake. Many Carmageddon fans may already have spent several hours in this game.

If the existence of the remake completely escaped you, it’s definitely worth revisiting it because it’s the best fun you can have slicing pedestrians in half in a way that won’t attract the attention of law enforcement.