DashDash Delivery is a recently released free game that came across my radar when I was searching for some of the new releases in Steam. It had an interesting goal of teaching financial literacy to those on the autistic spectrum. This is one of the things that got my interest, as it seems to be rather an interesting way of assisting those with disabilities. As someone who is on the spectrum myself, I may be a good test case to work out how well the game meets this objective.

With this in mind, I decided to check it out to try and work out how well it achieved this goal.

The basic premise of this game is fairly straightforward. When you launch the game, you are offered the opportunity to play as a male or female character. You are given the opportunity to make deliveries, which is how you earn your money. With the money you have earned, you are then able to make purchases in the game’s mall to customise your character or play games in the mall’s gaming arcade

Here’s where things got a little unstuck. When I was inside the game, only some of the things made any sense. For instance, it was fairly easy to work out how to purchase an item – just click it and buy. Once you had actually bought anything, it wasn’t immediately obvious how to actually use it. Or do anything other than buy things. You basically have to right click to activate your mouse cursor, left click on the mobile phone at the top right of the screen, navigate the rather non-descript and unintuitive icons on your phone to find the right thing, and then use it from there.

The problem is compounded by the fact that there is very little by the way of tutorials or documentation to assist you in navigating the clunky interface, which as you’ve probably gathered is not very intuitive. There are a few text boxes that come up later on in the game to give small hints about how this works, but the fact that I found out how to do that at all was purely guesswork. To call the interface clunky and unintuitive would be giving it a bit more credit than it deserves. It gives you warnings that you have bills due, which is part of the money management objective of the game, but you spend so much time struggling to work out the interface that the bill gets overdue, you get slugged with late fees and you become tempted to rage-quit because the interface is just too hard to navigate.

This means it is very difficult to initially follow the objectives of the game, as you spend more time fighting the user interface trying to understand how it works than you spend actually playing the game. 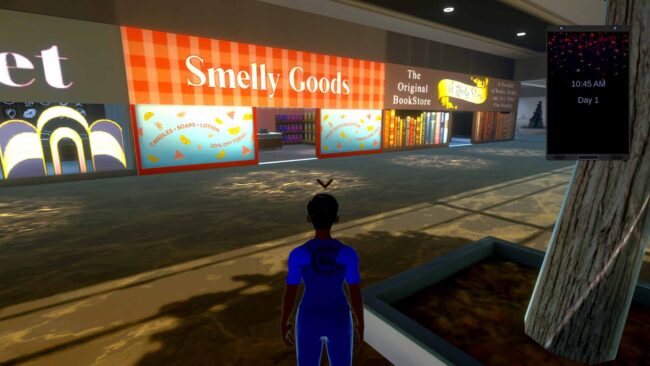 This brings me onto the other part of the game that I had difficulty wrapping my head around – the graphics and sound.

This may seem a bit off-topic at first, but bear with me on this. I have been a user of Second Life in the past. I remember the graphics of the user generated content in the early years being a little primitive, particularly the days before they introduced sculpted prims and mesh. Partly this was to make it easier for people starting out in content creation – a simpler toolset was easier for people to get their heads around when they were learning about content creation. The other part was to make the best experience for the more limited hardware of the earlier years.

The graphics in this game very much remind me of the quality of the designs from the beginner content creators from the early days of content creation in Second Life. It’s very simple, very clunky, and not very detailed.

Add to this the amount of sound spam when you’re moving between different stores. Sound that should only be heard in one store in the mall often bleeds into the neighbouring stores, and in some areas you can hear sound from 3 or 4 different adjacent stores. This is particularly the case in the gaming arcade Given one of the symptoms some people on the spectrum experience is sound sensitivity, this seems to be a really interesting approach.

There are also instances where, depending on your camera angle, you can have your avatar poke straight through your phone. There are more than a few times my avatar looked like it had been decapitated by elements of the user interface.

I actually feel very conflicted when writing this review up.

The game authors had some really noble goals in trying to develop new tools to help educate those on the autistic spectrum. For this reason alone, I really wanted to like the game.

The clunky interface, sound spam and graphics glitches meant that I found the game far more complicated than it needed to be. Given the aim of the game was to help those on the autistic spectrum, I suspect these aspects of the game will be more hindrance than helpful.

I want to try and be charitable for the game authors here because the idea itself is good. If they fixed up the problems with sound spam, and had a somewhat more intuitive user interface, this game could be a quite passable effort to achieve their goals.

The basic concepts are there, it’s just the implementation needs a bit more thought. I just wish that they hadn’t described it as a “student project that had been completed” because if the game authors were to revisit the game and make a few improvements, I would love to do a further review once the improvements were made.