Find Love or Die Trying is an interesting concept. It’s a reasonably new game, being released in September 2021. It’s a game that puts a bit of a spin on the whole Reality TV concept, but with a twist – if you don’t end up marrying one of the contestants, you end up being killed.

It’s a rather unusual take, with a somewhat different presentation Given the base game is free, it’s a nice addition to our Free Week. Let’s give this game a bit of a spin and see if this game has any particular merit.

The game takes a rather interesting approach to gameplay. The basic gameplay is that you play a character who finds themselves on the scene of a Reality TV show where you are looking for someone to marry. You have five different candidates and you take them on dates and activities which all form part of the Reality TV show you have been roped into starting in.

The goal is to woo one of the contestants well enough for them to accept a marriage proposal at the end of the ordeal.

The game has one very big twist. If the person you propose to refuses, you die. The contestants are not aware of this and if you tell them, you all die. This adds a rather dark twist to the game.

That is the basic crux of the storyline. It does take a rather interesting approach to how the game is played. The game can best be described as a point-and-click choose-your-own-adventure game. You’re basically taken through several lines of dialogue and once you get to a point where you could branch off into several directions, you get to make a choice as to which way you want to go.

This is an approach that works fairly well here. They’ve obviously given a lot of thought to how to make this all work as it tends to go fairly smoothly. The only thing I’d comment on is some sections of the game involve reading a lot of dialogue, and at times this does feel a little slow.

Aside from this, I do like the approach. I actually found it surprisingly engaging. The storyline is extremely captivating and the game leaves you wanting to continue the storyline to find out what happens. The concept sounds a little far-fetched, but it was very well thought out and works. It’s a game you’d lay when you want to have a chill night in rather than a high-octane hyped-up gaming session. 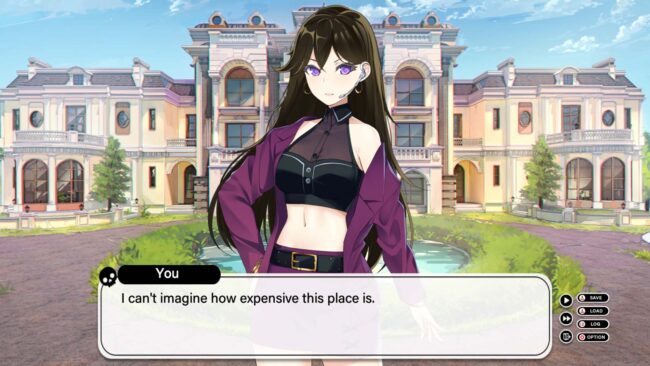 In Find Love or Die Trying, you won’t find any elaborate 3D environments. Being a point-and-click type adventure game, the images are primarily static with some animation. In some senses, it’s somewhat like a choose-your-own-adventure book that’s been adapted for use on screen.

This again works a lot better than it sounds. It’s been very well thought out and has been designed really focus on the story-telling and on the ability to make choices when it gets required. It’s almost like a choose-your-own adventure book in game form.

There are a few times when it does get a bit slow due to the length of some of the dialogue. However, it does make the game very chill and relaxed rather than be a fast-based game designed to get your heart rate up.

This game is a rather interesting take. It is part choose-your-own-adventure, and part statement about the state of reality television. I suspect half the reason this game exists is as a statement on the absurdity of Reality TV.

It can get a little bit slow at times with the length of some of the dialogue. Aside from this, it is actually very well put together. If you’re looking for a more chill story-telling game to play just to wind down, this could be a game worth investing some time into.