Many years ago, I experimented with the game Rocket League. It’s s game I never really completely got the hang of. The problem is I spent more time circling around the ball than hitting it. I did progressively get better at the game, but never to the point that I would call myself a great player.

My experiences with Rocket League led me down the path of testing Protoball. This is another futuristic sports game but rather than playing soccer with cars, you’re playing a variation of basketball in the air.

While some of the add-ons do cost money, the base game is free. As such, I am including it in our Free Week reviews.

Protoball is a really simple concept. I made a mention of Rocket League earlier, which can be summed up as futuristic soccer with cars. Protoball is futuristic basketball which requires you to spend a bit of time in the air. I know I’m repeating myself a little here, but that’s probably the best description I can give the game.

When you go into the game, you will have an opportunity to customise your character. There are a few different options you can choose from in terms of character appearance and outfit.

One thing that I would recommend is running through the basic tutorial. While the game isn’t necessarily complicated, the fact that you have to spend time in the air to properly line yourself up for goals can take a little bit of time to get used to.

Once you start a game proper, the goal is really quite simple. You can play groups of up to six people, with up to three people on each team. There is a time limit of five minutes, and the goal is to get as many points for your team, the winner being the team with the most points.

There was an issue I came across when I was searching for online games. This is a sentence I never thought I’d write in a review for this site, due to the connotations some might attach to it, but you might spend a lot of time playing with yourself. There doesn’t seem to be many people playing against randoms at the moment. Having said that, Protoball does integrate fairly well with your Steam friends list so you can invite your friends in. This is understandable at this point, given that the game is still Early Access at this point. Protoball is really a game you want to play when you can arrange other people to come in with you.

If the developers can get some more players doing online play, I can actually see the game having a lot of potential. It is a similar concept to Rocket League which of course has a very big following behind it. I can see this being the same for a basket-ball like game. While I’d recommend spending a few minutes playing solo in an arena, the characters were really very easy to control and get the hang of. It’s quite a lot of fun and very easy to let your competitive streak through. For the moment, you’ll get the most out of this if you’re able to get a few friends to play with. 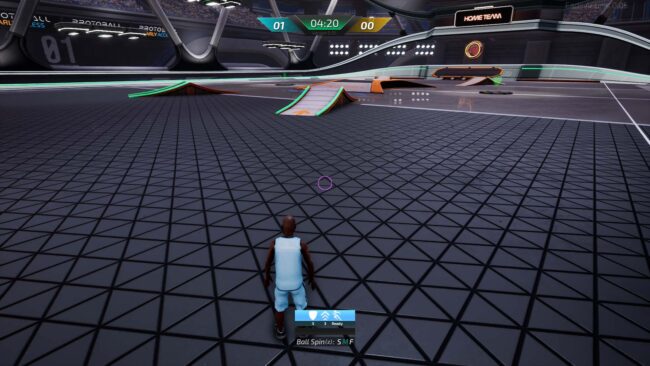 The graphics are really quite well done in this game. They’re fairly simple, and they’ve obviously been scaled back to work on a wide range of hardware. In this case though, that’s not a bad thing at all. They’re really well done.

The risk with a game like this is that you don’t’ want to get the balance wrong. Too simple and the game looks very plain. Too complex and detailed and you get something that could be far too distracting and would require more powerful hardware.

I think in this case they’ve got the balance between these two extremes about right. The balance they’ve struck is the perfect compromise between the two.

I’m scoring the game reasonably well. I can see a lot of potential in this game. They seem to have got a lot of things tight. The graphical detail is a good balance, the controls are easy to master and it’s actually quite a lot of fun.

The one thing that I can see working against it is the lack of players in online games right now, limiting your opportunities if you’re wanting to play but don’t have many friends online to join you. It’s basically a game you’ll need to get your friends involved with to get the most out of it. This is likely related to the game being in Early Access. I hope the game receives a bit of promotion and grows enough over time to work around this problem.