In the world of casual gaming, it’s nice to have a few games in your collection that are more short diversions rather than long-form games. This gives you something to play more as a distraction rather than something you sit down with for hours. This is partly whi I think games such as Fruit Ninja and Angry Birds seem to have done so well.

This is where Nevemodo comes in. It seems to be a PC-based game that you could play during some downtime and not have to worry about getting too involved. It’s a game you could play as a distraction to pass the time for a few minutes.

Nevemodo is about as simple as it could be. You play as a Zetlex robot, and your job is to move around a small playfield and kill the enemy soldiers before they kill you.

You do get particular targets to work towards, for instance killing 100 soldiers, so there are some sort of side goals to pursue if that’s your thing.

There really isn’t a lot else to it. It’s not particularly complicated. This is what makes the game so appealing. There’s no complicated gameplay, it’s a simple straightforward game you can play for as long or as short as you like and come back to later.

There are a few trivial issues that I noted. For instance, I couldn’t get the main menu to respond well to mouse control. You will need to be comfortable with using a keyboard to navigate the main menu.

The other weird quirk was that it did not seem to handle full screen well at all. The Windows task bar was always visible and it tended to cut off on the bottom. It’s possibly related to my dual monitor setup, I’ve had occasional issues in past lives with games having weird compatibility issues with dual monitor setups. However other games I’ve played based on the Unity engine seem to cope well enough, so I’m unsure why it’s being so quirky. Once I had the game running, it was still playable enough.

For such a simple game, it is actually a lot more fun than the basic description makes it out to be. It was actually quite hard to put into it. It’s not something I’d necessarily sink hours into at a time, but as something to kill a few minutes it’s actually quite decent.

I found it was fairly easy to just “lose yourself” in the game, at least for a shirt period. By that I mean it has a fairly simple charm that allows you to become very focussed on the game without too many distractions.

The controls are also very easy to navigate, and the robot you control acts very predictably. I’ve found some other games to be either too sensitive or not sensitive enough when it comes to controlling your character, something which seems to be about right in Nevedomo. 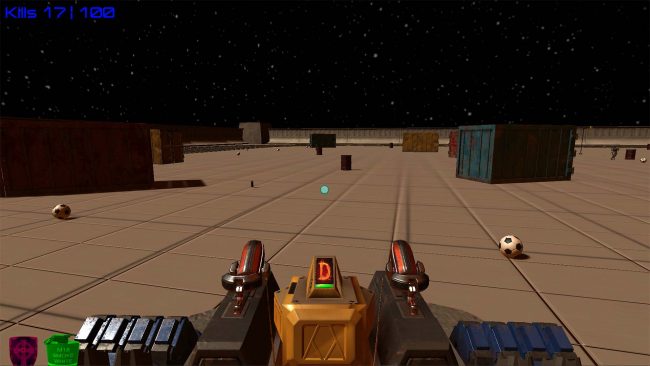 The graphics were fairly middle of the road. They definitely aren’t very highly detailed, but are still quite passable for a simple first-person shooter.

The main menu does allow you to select from a very wide range of graphics qualities. Unfortunately, due to the bug with this section being cut off, it’s very hard to actually make out which oine was selected.

The graphics were otherwise extremely passable for the simple game this is.

If you’re looking for a highly detailed game to sink hours into, this may not be the game for you.

This game really targets more casual gamers who are looking for a simple, low-cost game to act as a diversion. If this is what you’re after, it does the job fairly well.

It’s basically a middle-of-the-road, inoffensive game that you can sink a little bit of time into here or there when you have nothing else to do.