The Simulation genre of games has been plodding away for several years. They started life out in games such as SimCity, took an interesting turn with things like Roller Coaster Tycoon in the late 90s, and now it seems like there’s a Simulator game for just about anything. It seems just a little bit creepy that back in 2015 “Shower With Your Dad Simulator” made an appearance and still exists on Steam. It seems there are developers that want to take any concept and turn it into a simulator.

Play Outside Simulator is the latest addition to the genre. I’m not sure whether this was ever intended to be a serious game, or whether it is a statement on the absurdity of some of the games in the genre, but it seems worthy to take a look to see how much life this particular genre has in it.

It should be noted that, as of right now, the game is Early Access. This essentially makes this game a “beta” version and features may be added, removed or changed.

The concept behind Play Outside Simulator is fairly simple. You launch the game and have the ability to select one of several maps. These maps range from small to large maps, and include a house with swimming pool, a simulation of the planet Mars, and a forest map, as well as a few others.

Each map has different objects, some of which include vehicles. The idea is to “go outside”, find objects to interact with, and then interact with them.

It is essentially a simple form of open-world physics-based exploration game with a number of different maps.

I think this is where this game more becomes a statement on how ridiculous this genre of games can be rather than a serious game. While parts of the game, particularly vehicles, can offer a bit of fun, the game is at this point single-player only. This basically means that the game gets a little bit slow after a while.

In some senses, this isn’t necessarily a bad thing. You do sometimes need a “meta” style game to critique some parts of the industry and I think this game helps serve that purpose. The problem is it does get a little bit old after a while, and really if it wants to become a game that you get more than a few minutes out of, it really needs to introduce the ability to play multiplayer. This would add to the interaction by allowing you to explore the worlds together, and turn the items into experiences you can actually share with friends. 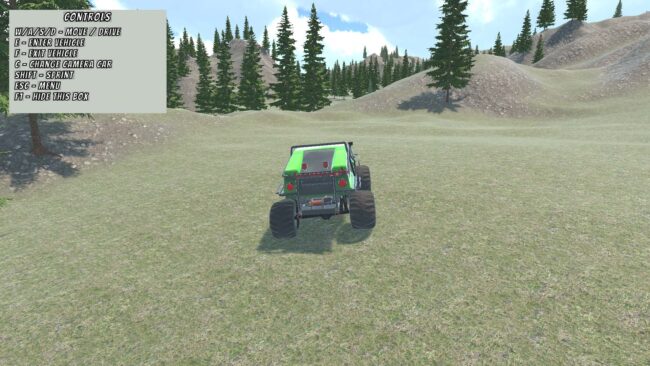 The graphics in this game are fairly middle-of-the-road. They’ve basically been scaled back to work on lower-end hardware. In some cases, such as the Forest map, this works alright. though on other maps it does look a little crude.

One thing I did note was that graphics could occasionally glitch out. This was mainly noticeable on the forest map where there were large expanses of water. The reflections on the water would look really odd and unnatural at times. This may be because this is Early Access and they’re smoothing out some of the rough edges, so hopefully this gets fixed as part of a future update.

It’s hard to know where to place this game. In one sense, it does seem to be a statement on the ridiculous nature of some of the games that fall into this genre. After all, I have mentioned the creepiness of things like Shower With Your Dad Simulator. If this is what the game developers were aiming for, it’s actually not a bad effort. It does prove the idea that developers will take any concept and shoehorn it into this genre.

With the number of maps that are available at launch time, I would suspect this is likely to grow once the game goes out of early access. If this does occur, they could become good little time-wasters for when you’re feeling bored. Without some form of multiplayer, I’m not sure I could classify this game as anything other than a basic time-waster because it’s otherwise easy to get bored of it very quickly