It seems Retro Week has been somewhat dominated by games released by id Games. This I can assure you was not deliberate. Having said that, their big claim to fame back in the 1990s is to develop a lot of technology to further 3D gaming on the IBM PC platform. This is probably why they ended up making such a big part of Retro Week.

The classic Wolfenstein 3D game has already been reviewed some weeks ago, with Ultimate Doom also making an appearance this week. Return to Castle Wolfenstein represents a sequel to the original Wolfenstein 3D, released almost ten years later in 2001. Of course, a lot of changes happened in that decade in terms of technology so the game is very different to the original. I think it’s worth adding in so people can see the progression of 3D Gaming through the early days.

Return to Castle Wolfenstein is a far more involved storyline than the original game. With Wolfenstein 3D, it is a very simple FPS where the goal is to kill all the guards, find the keys to the exit, then find the exit to proceed to the next level.

Return to Castle Wolfenstein is a lot more involved. You are still playing the same character, William B.J. Blazkowicz. Depending on the level, you are tasked with a retrieval mission, sabotage or assassinations. This makes the storylines a lot more complex. Enemies can vary from standard soldiers to zombies and other experimental creatures.

It is very obvious from the start of the series that these other characters are part of Nazi scientific experiments. You also have access to a wide rnage of fictional Nazi weapons, including a minigun and a Tesla gun.

Going through the level, the difficulty is considerably more difficult. This is not impossibly so, and this may be because I’ve played the original game often enough to remember the maps. The enemy characters move around a lot more, and are a little more aggressive with their gunfire. This does add to the challenge of the game, but in a fun way.

Return to Castle Wolfenstein definitely represents the improvements in technology in the near-decade between this and the original game. The game is a significant improvement in storyline and variety. This shows what a decade can do in terms of computer power and the quality of the gaming engines. This is a substantial improvement between the two games. While the original Wolfenstein represents the limitations of the technology at the time, Return to Castle Wolfenstein is far closer to what you’d see in a modern FPS. 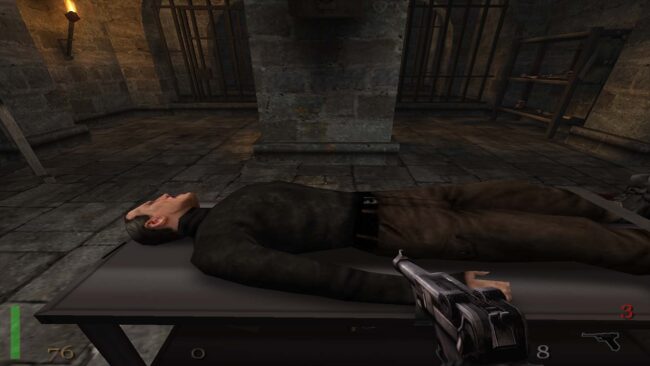 The other major improvement with Return to Castle Wolfenstein is the graphics. The original Wolfenstein 3D game ran at a very lowly 320×200 graphics mode to maintain performance on the computers from the early 1990s.

The graphics in Return to Castle Wolfenstein are far more modernised. Given the game was released in 2001, the graphics are actually quite amazing. It still runs at the screen resolutions of the day, so there’s no 16:9 720p or 1080p graphics here. Introduce modern 16:9 resolutions and, with a few tweaks, these graphics could easily pass for modern graphics.

The animations can sometimes feel a bit primitive. Don’t get me wrong, they’re not terrible, but occasionally just feel a little unnatural. I suspect the reason for this is that animations in the gaming engine were still in the early stages and were still somewhat limited, and perhaps for this reason I’m projecting modern gaming onto an earlier game.6

If you’re looking for an example of how quickly things can change in a decade of technology advances, you could use Wolfenstein 3D and Return of Castle Wolfenstein as a very striking example. These games are just shy of a decade apart, and they demonstrate the sheer scale of the advancement in the PC platform during this period.

Wolfenstein 3D is not necessarily a bad game, but is really a product of his time. Return to Castle Wolfenstein substantially improves the game and brings it a lot closer to what you would expect from a modern FPS game.