Some people say things come in threes. Given my last two reviews for the site have been first-person shooter reviews, this could very well be the case here because I’m reviewing another one.

Zombie VS Police again seems to be a little bit of a deviation from the popular games of this genre. It is, as its name suggests, zombie themed. Let’s give this a run for its money and see how it stacks up.

This game is really about as simple as it gets. You are playing the part of a police officer. Your job is to go round the town killing all the zombies, before they eat you.

Launching the game and you don’t have a whole lot of options to select. This is good in terms of simplicity. The less technically inclined are less likely to be overwhelmed by a confusing mess of options they don’t understand. The only thing missing I think is the ability to turn off background music. While the music is not terrible, I tend to prefer not having game music.

There are two different ways to kill the zombies. You can either use the pistol provided to you, or you can commandeer a police car and run them over.

Starting with the pistol, it’s surprisingly easy and surprisingly fun. The pistol does not really work as a long-range weapon here in Zombie vs Police, you really need to use it as a short-range weapon. This does make the game a little more difficult, as you can’t easily kill the zombies from a distance. You also need to be constantly on the move to avoid the zombies from surrounding you. But as a weapon, it’s otherwise very easy to control.

Once you get the hang of it though, it’s surprisingly fun. They’ve paid attention to making sure the zombies can be killed easily, which if you’re like me and can’t aim to save yourself is a good thing. The game is difficult because of the short-range nature of the pistol, but definitely by no means impossible. As long as you remember to keep moving and not allow yourself to get trapped, this becomes extremely addictive very quickly.

The car is a slightly different story. There are a few police cars hanging around you can use. Once you’re in the car, it puts the camera angle at a very weird angle. The camera does not turn when the car changes direction unless you move your mouse to follow it. This does make the car difficult to control. It would make more sense to put the camera slightly further up and have it track with the car when it changes direction without having to rely on the mouse, which is closer to what you’d traditionally see.

An added bonus with the car is it’s possible to drive it off the edge of the map, which results in a crash and you dying. This adds a certain challenge to the game, which is not necessarily a bad thing.

Having said that, once you get the hang of it, the car does give you a great way to mow down zombies while only taking minimal damage yourself. Being difficult to control because of the weird camera angle does detract from the experience though.

Overall, with the exception of the control issues with the car, it is very easy to get addicted to this game. It’s very easy to play, and although simple is also oddly satisfying at the same time. If you’re looking for a bit of quick FPS action to let off a bit of steam, this game could quite well do it for you. 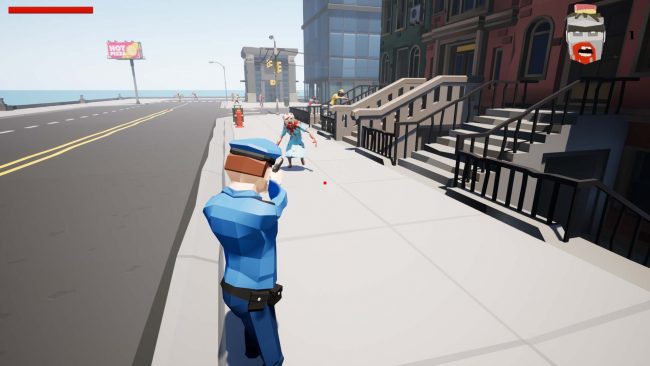 This is another game that targets fairly modest computers. The CPU and graphics card requirements cover almost anything from the last five years or more that you could get your hands on.

The graphics have been simplified as a result. I’ve criticised some games in the past because this has been done badly, and others have been able to pull this off fairly well.

In this case, it’s middle of the road. The graphics, despite being simplified, have a sort of cartoony charm to them. It has a very distinctive art style that works. The reason I say it’s a bit middle of the road is that it does look a little busy in places, which can be a bit distracting. Aside from this, it’s one of the better examples I’ve seen of how you can make simplified graphics work.

This is actually a surprisingly fun little game that could get very addictive very quickly. I think its sheer simplicity is what makes it so fun. It’s not necessarily a game you’d spend hours with involved in a complex storyline, but that’s hardly the point. It’s more a cheap game you’d fire up if you were just looking to blow off a bit of steam.

The game is actually quite charming in some senses. The only downsides are that the graphics look a little too busy in places, and the car’s camera can be a bit difficult to control.