Age of Empires 2 is a game that seems to never die. I remember playing the original game back in the early 2000’s when I was studying network engineering with one of my lecturers. We called it “network testing” so we could pretend it was a constructive usage of our time between classes.

Fast forward a couple of years, I ended up buying the Age of Empires 2 HD version when it became available on Steam. This was essentially the same game, with a few tweaks to the textures and the game’s AI engine. Aside from some new expansion packs, there were very few other differences that I noticed between this version and the original game.

Almost in line with the 20th anniversary of the original release, we now have the Age of Empires 2: Definitive Edition. Aside from some further improvements to graphics, there are redesigned menus, more expansion packs, and improvements to multiplayer games.

There are also new releases of Age of Empires 1 and 3. These will likely end up being reviewed separately, though I’m starting with Age of Empires 2 because it’s the one I have spent the most time playing and am most familiar with.

So with this in mind, I managed to coax one of our other writers, MrQGames, and challenged him to do a few multiplayer games to build our own empires and start blowing holes in the enemies. 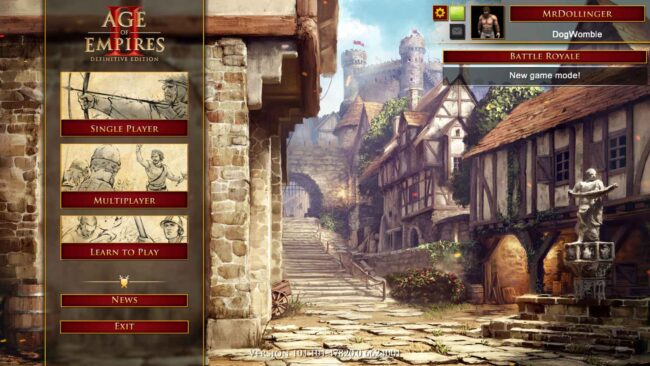 One of the first big changes I noticed was a far more modern looking menu system. While I never hated the original menu system, it was beginning to look a little cluttered and dated.

When setting up the multiplayer games, the lobby does borrow heavily from the original graphics but does seem to be slightly tidied up. It is extremely easy to navigate and is about as straightforward as you can get.

One thing that doesn’t seem obvious is that it is possible to have network games between those that have it in their Steam library and those that have it in their XBOX library. You will need to enable this in your Options. Under the Game tab you enable the “Enable Crossplay” option. Once this is enabled, I’ve been able to send game invites to our friend MrQGames who is on my Steam friends list, and he’s been able to play using the copy of the game in his XBOX library.

The only disappointment is that you won’t be able to do crossplay with the older Age of Empires 2 HD edition, so if you already have this version, you will need to purchase the Definitive Edition to be able to utilise this feature. There are various technical reasons for this to be the case, but those that have already paid for the HD version might be irritated that they have to pay for the game again to play with those playing Definitive Edition.

The basic principle behind Age of Empires 2 is very simple. It is a real-time strategy game, where the purpose is to build and upgrade your empire, starting in the Dark Ages and going all through to the Imperial Age. Each Age gives you access to upgrades foryour existing army and buildings, and access to new ones. Moving to a new age is done through a town center, with unit upgrades done through the building that creates them.

It is possible to create allegiances between different teams when you set the game up. A multiplayer game can be up to 8 characters, which can be a mix of human and AI, and you can assign these players with up to 4 different teams. You can also butcher together a fifth team by having a player unassigned to a team, though those unassigned to a team will not be allied.

Note that you have the option of utilising the new AI, the original AI, or a mix of both.

There are a few other game modes you can employ as well when you set up a multiplayer game. These allows for other styles of game play. You’ve got the ability to set time limits, with the highest score after a set time declared the winner. You can also set up the first player to a particular score. I’ve never really seen the point of these particular game modes, so I’ve largely ignored these. When playing multiplayer, the fun always seems to be in the battles and sending your army out to conquer other civilisations.

Of note are ‘relics’, which many players may miss when they first start playing. These are gold trophy-like objects scattered throughout the map that, when collected by a monk and placed in a monastery, will generate gold for the player. These relics can be a great way to help you manage your resources by providing a steady income while the game progresses.

This brings me onto the subject of resource limits. You will have to pay close attention to how much gold, stone, wood and food you have. You will need to construct mines next to gold and stone mines and use workers to collect these resources, food comes from farms with wood coming from trees that can be sent to lumber camps which you can build near to where you’re collecting it.

It is always very important to ensure that you have the collection of these resources secured right from the start, as you’ll very quickly run out after you begin upgrading. However if you start a game with the “Death Match” game mode, this does give you additional resources when you start the game. This is the option I usually use, as it helsp you get to the action more quickly.

For a bit of additional variety, you can also change the game mode to activate different play styles – for instance Battle Royale, Sudden Death or Defend the Wonder. These would be great if you’re just looking for a short game, however I’ve tended to avoid them because I’ve always tended to prefer going for a longer session where I have to be more strategic to win. They would also be game modes that are more appropriate when everyone has fairly similar skill levels, whereas I’ve tended to play with people who are either beginners or where I haven’t been sure what their skill level is.

Graphics and Other Improvements 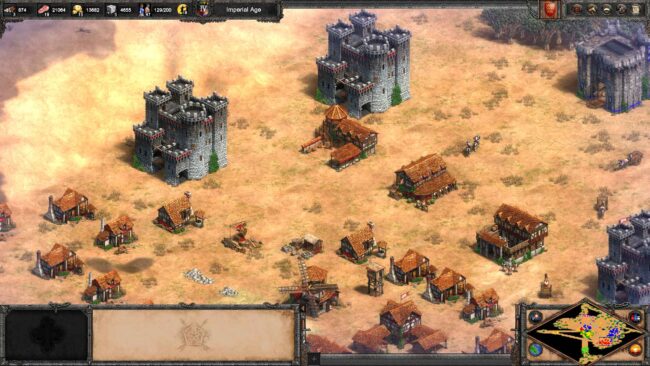 I want to make a mention of the game’s graphics.

In the HD remake from 2013, there was a series of new textures, but it otherwise changed very little. It was basically a new version of the game with a new coat of paint, improved AI and integration with Steam.

It does once again sport a fresh set of new textures to make use of the improved capabilities of modern graphics cards. This is done tastefully, and done in a way that allows you to run the game on a potato.

This version does go beyond just a new coat of paint. There are improvements apparent when you’re constructing a building. Any building that takes a significant time to construct, such as a castle, now shows a form of “scaffolding”. This acts as a progress bar showing you how close the building is to being completed. This is a massive improvement, as previously you would have to click on the building to see how far away it was to completion. When you’re in the initial building phase, this makes keeping track of your progress easier.

Animations, such as player and animal movement, seem to be smoother and more detailed over the original movements. For instance, mining animations just seem to have more character, and your initial scout cavalry seems to have just a few more movements to it. It appears these have also been completely redone to allow for the improvements in graphics capabilities over the years.

The other big improvement is that has improved is the process of doing upgrades to your units. You can now queue upgrades. By this I mean rather than having to wait for one to complete before you can select the next one, you can now click on a building and click on as many available upgrades that you’d like (and have resources for). They’ll be upgraded in the order you select them. You will receive visibility of what’s being worked on just under your current resources, meaning you can keep track of what upgrades are being done. This again is a huge improvement over the original game, and makes keeping track of your upgrades a whole lot easier.
​ Verdict
It’s hard to believe that Age of Empires 2 has been with us for over two decades. The first Age of Empires game was great, but it was Age of Empires 2 that really cemented this series of games as a classic.

This version is in some ways a new coat of paint, however it does go on to make some substantial improvements over the original game. The improved graphics, animations and interface will definitely breathe some life into the new game. Having it support crossplay, at least between Steam and XBOX, will vastly simplify setting up multiplayer games, particularly for those whose gaming contacts extend over both platforms. It definitely beats the process of learning the art of port forwarding to get networked games going under the original game.

For those new to the Age of Empires series, this is definitely the version to start with. It’s been redone in a way that makes it feel far more modern than the original. For those who have played the earlier versions of the game, the game still feels a lot like the original, but offers some improvements to make it a better, easier to play game.

The only disappointment is that crossplay doesn’t extend to Age of Empires 2 HD players, which means some may be disappointed at having to pay for the game again.