I’ve spent a lot more time than I care to think about playing Age of Empires 2. It was this version of the game that got me addicted to this particular franchise. I dare not think about how much time I have sunk into learning these games or how much money I’ve invested in the various expansions.

Although Age of Empires 4 has now been out a few weeks now, I’ve been wanting to give it some testing. It has just been somewhat delayed by Retro Week, and some of the other reviews I’ve had queued up. Now that I’ve had some time with the game, I think it’s time to give it a review.

If you’re familiar with the earlier Age of Empires 1 and 2 games, this game should already be somewhat familiar to you. Age of Empires 4 is very similar. It is a very similar empire building and defense game, it just covers a different period of history, from the year 1066 onwards.

Like the earlier games, there are two different game modes. I’ve spent most of my time in previous versions playing multiplayer skirmishes, though for this review I’ve spent some time playing a little of both.

The first game mode you can dive into are the Campaigns. This is the first time I’ve spent time in the campaigns in any of the Age of Empires games. These campaigns cover different historical battles and cover them in chronological order.

These have been done particularly well. You are somewhat guided by a narrator who helps guide the gameplay It is important to follow the narrator as you will not be able to use certain units until the narrator reaches the part of the story they can be used. Having the guidance of the narrator will help you make use of your resources.

I’ve mentioned in previous reviews that there are those that have learnt a lot of history from the early Age of Empires games, particularly Age of Empires 2. While I can’t particularly vouch for the accuracy of the information presented in the campaigns, it would not surprise me if the same is said for Age of Empires 4. The campaigns are intended to talk you through how these particular battles played out and have obviously been very thoroughly researched. You still have to use a certain amount of strategy to avoid being slaughtered, but if you combine the narrator and a little bit of strategy these are an extremely engaging way to learn about these battles.

The other major game mode, which is the one that most people would be familiar, is the skirmish. This is where you can challenge either a series of AI or human players. You’ll build up your village, defend it from attack, and then attack others. The winner is the last village not to be wiped out.

This sounds awfully like Age of Empires 2, and indeed it is. The big difference is the range of weapons and units available to you given the later period in history.

One thing to note is that the AI is quite a lot more aggressive than Age of Empires 2. In the earlier games, when you select the easier AI difficulties they will generally only attack when provoked. This is not the case with Age of Empires 4. Your enemy will still attack unprovoked on easier difficulties. This will require a completely different strategy to defend your base.,

This makes Age of Empires 4 e a lot more challenging. This is not Age of Empires 2 with a new set of weapons. When playing against AI, Age of Empires 4 will require a new set of strategies to be able to win against your opponents. This makes the game a lot more fun as it’s not just the old game with new stuff. You will need to be a lot faster in building your army and your defenses to be able to succeed. This does not take away anything from the game, simply it’s something you will need to learn. 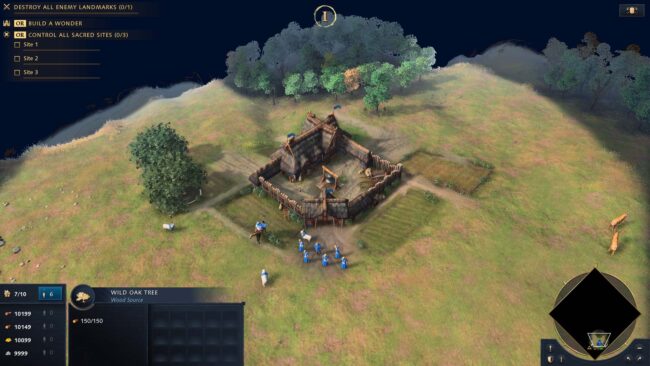 The graphics in Age of Empires 1 and 2 were known to be extremely good for their time, and the Definitive Editions released a few years ago did a substantial amount to improve new graphics to the game.

Age of Empires 4 extends this even further. While the Definitive Editions of Age of Empires 1 and 2 could almost pass as a modern game, Age of Empires 4 really steps it up another level again while still maintaining the character of the earlier games.

A lot of effort has been done to balance these two ideals. You don’t’ want a dramatic change to the character of the earlier games, but improvements in technology also allow for improvements in graphics quality. In the case of Age of Empires 4, the balance is about right in this regard.

The Age of Empires franchise has a rather interesting history. It’s a franchise that’s now a quarter of a century old. The earlier games have gone through a cycle of releases, then re-releases with various updates made.

Age of Empires 4 follows the tradition of each version of the game covering a different period of history. The new edition covers from the year 1066 onwards.

This version has something to offer for both new and experienced players. The new Artificial Intelligence engine makes it considerably more challenging than the older Age of Empires 2 that most people will remember playing. You will need to learn new strategies to be victorious. For those looking for more of a challenge, Age of Empires 4 definitely delivers.

For those that want a civilisation-building game that is current and aren’t interested in playing the earlier games due to their age, Age of Empires 2 would definitely be a great place to get started. With the franchise being around for such a long period of time and having a fan base that covers the entire history of the game, this is definitely no flash-in-the-pan franchise that’s going to disappear in a few months.