Back To Bed Review

Back To Bed came to my attention when I was randomly browsing the Humble Bundle website and noticed it on sale for practically nothing. It seems to have been out for a while, and it’s a game that had not come to my attention.

The game seems to offer a new spin on your typical single-player puzzle solving game, so given the fact it was on sale I thought it worthy of having a crack.

There is one particular thing to note when you first launch the game. When I installed it, it seemed to default to a screen resolution of 640×480. This took me by surprise a little. Every computer I’ve owned since the mid-1990s has been capable of running resolutions far higher than this, so it seemed an odd choice of resolution to default to. It’s fairly trivial to go into the game settings and switch it to a more appropriate resolution, however it still struck me as a little unusual that this was the default that was chosen.

The game centres around a character called Bob, who is not only narcoleptic but has the unfortunate habit of sleepwalking his way off the edge of the platform he is on. You take on the role of Subob, whose sole purpose is to guide Bob safely towards his bed.

The mechanics are fairly straight-forward. You have an apple-like object that you can pick up and place in front of Bob’s path to cause him to change direction and guide him towards the safety of his bed. It’s a relatively simple concept, though it did take me a few goes of the early tutorial levels to really get the hang of it.

Having said that, once I got the hang of it, it did seem to be quite an interesting concept. It’s basically a combination of top-down scroller and puzzle solving game. The puzzles are ones you will have to give some thought to, they’re not ones you would want to solve with a hangover. I did end up abandoning one or two of them, primarily because of the clunky nature of using a keyboard and mouse with this game, but then the game is quite forthcoming in suggesting the use of a controller so that is on me. 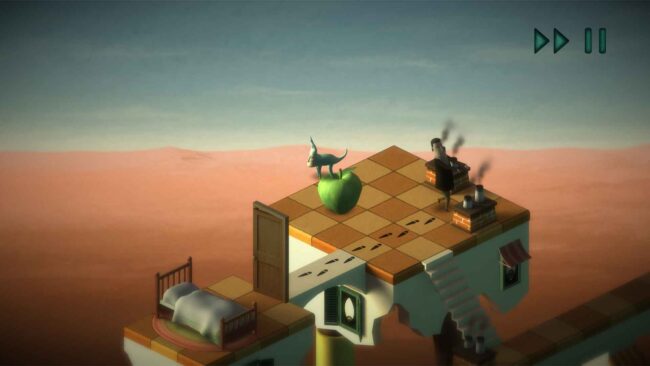 I do particularly love the graphics in this game. With note of the earlier resolution quirk, it may require some settings to be changed to find a better match for the equipment you are using as it seems to have some interesting defaults.

That said, the graphics came across as simple, yet clean. They’re not super-detailed, but seems to follow an art style that for this game just seems to work. There is very little to distract you from the main objective of the game, and there’s a focus on making sure everything makes sense. This is very well done. Given the target for this game is a machine with Intel onboard graphics, the graphics are surprisingly good.

I think a lot can be learned from this particular style of game. While some games are specifically designed to have very detailed graphics, sometimes you just need something simple that does not distract you from the main objective of the game. Back To Bed is an example of how you can do simple, distraction-free graphics well, even when youjr target is a relatrively low-end machine..

Back To Bed offers a unique spin on your typical problem-solving and puzzle style games, What drew me to this game is that it is not a horribly rehashed story line or idea that has been redone far too many times which appears to be a common thing in some genres. It’s something different.

It’s not a game that you will sit there and play mindlessly. This is one of those games that I will keep around for those times when I feel like playing something that requires a bit of intellectual stimulation. It’s very simple, yet very effective.

It’s not necessarily a game I would spend hours playing. While the concept is very different, it will only hold your attnetio for the puzzle solving aspect. But as somethng that could be a short few rounds of intellectual stimulation, it would work well enough.