Beholder 2 came to my attention when I was looking around Humble Bundle. This is something I’m prone to do every now and again to try and experiment with different genres and games without having to part with huge amounts of money. I’m sometimes a cheap bastard. I’m not sure there should be any shame in that

The Beholder franchise had not previously come across my radar until I saw Beholder 2 come up on Humble Bundle. Beholder 2 came across as a game that had a rather different storyline behind it. I’m only somewhat of a political person myself, but I thought the nature of the storyline was worth investigating to see how well some of the concepts in Beholder 2 would translate into a game.

The basic premise of Beholder 2 is fairly simple. You are an intern that has been given an opportunity to work at the Prime Ministery of your countries’ authoritarian government. You are starting your job at the bottom of the career ladder and you have to work your way up.

Your decisions will shape what type of person you become within the game. You can become a diligent worker who chooses to follow the word of The Man and brownnose their way to the top. Or you can try and become a whistle-blower intent on destroying the government.

The game interface is based around a point-and-click adventure style with a limited amount of free movement. This had me slightly concerned at first as this has the potential to be quite slow. In the case of Beholder 2, this was actually done really well. You could easily skip over less essential parts of the storyline. This meant that if you wanted just a chill relaxed game, you could slow it down and really take in the full story. If you wanted to just get on with it and only focus on the stuff that was really important to the story, this is an option for you as well.

The game also assigned you a number of different tasks to complete. If you wanted to play the straight character, you could aim to complete these tasks as assigned. It was also rather fun to try and experiment with how you could try and be naughty.

I am somewhat reminded of The Stanley Parable with this game. For those that are unfamiliar, The Stanley Parable’s biggest selling point was that it was designed with multiple endings that were found by deliberately disobeying the narrator. This almost feels the same, though in a slightly less comic way.

I would say this game straddles that line between The Stanley Parable and point-and-click adventure and it does it well. I don’t’ want to give too many secrets away, as half the fun of this game is finding the different ways to play it. But there is a lot to be said about trying to find the different ways the story could play out. 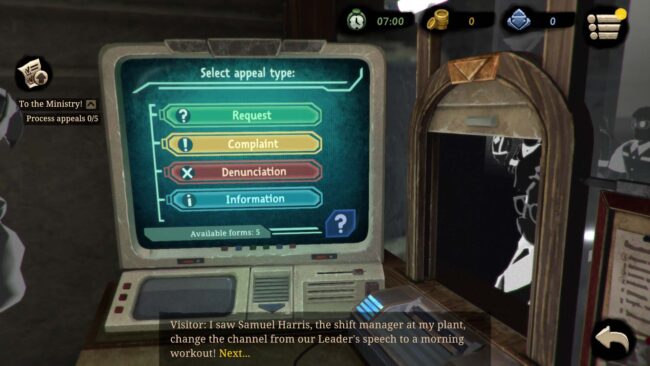 This game is now a few years old. It also seems to target older versions of DirectX, working with versions as far back as DirectX 9 which would really be considered a bit antique now.

With all that said, the graphics were really quite well done. The art style gave a lot of character to the game, and there was a dark and sombre feel to it that matched the tone the story was trying to achieve.

A lot of attention has obviously been paid to ensure that the tone of the story gelled well with the visual style. It’s worked really quite well.

This game is definitely quite a lot of fun. It is a storyline I didn’t think would work at first, but as I was starting to get into it, I realised how well it was done.

It combines point-and-click adventure with certain elements of the Stanley Parable in a way that’s quite fun. The game is made by the different ways you could influence the storyline based on the decisions you make. It’s a very thoroughly written story that is engaging to explore.