Catnab is a game that builds in the crazy cat lady within us all. As a free to play game, Catnab definitely worth having a look at to see if it can raise the silliness factor of our game collections.

When you start the game, you don’t really have a lot of options to set. In fact, there are none at all. This is a good thing, as there is no confusing array of options to set which simplifies things for those that are less technically inclined.

The interface to start a new game is a little unusual. Rather than selecting from a standard menu, you are supposed to walk up to a door and select it to start the game. This isn’t bad, it just took a moment to work out.

Once you start a game, the aim is quite a simple. Catnab a simple side scrolling platformer. You’ll need to collect as many cats as you can and deliver them to your home, all before the time runs out. And that’s really all there is to it.

The simplicity of the game leads me to think it is more a game that is targeted towards children. As a free game for children, I think it does a decent job. It’s simple to get your head around, the controls are moderately easy, and there no complicated storylines. It’s almost as simple as a game could get.

My only criticism is that the controls felt a little awkward at first. This means for the first few games you might be getting the feel of the controls a little more than you’d like. Once you’re used to them, it’s not too bad.

I probably wouldn’t hold it much higher than that. It’s definitely not a game most of the rest of us would sink hours into. I think the game otherwise falls into “fun little diversion” rather than full game. And that’s OK. It appears that’s all Catnab was ever intended to be. If you’re expecting something more, you will probably be disappointed, but as a free game targeting young children it does its job well.

One thing that it does fairly well is it integrates very tightly with the Steam achievements. This is actually done fairly well, as it appears most achievements are easy enough to get. This allows an easy way to help celebrate progress with the younger players this game targets. 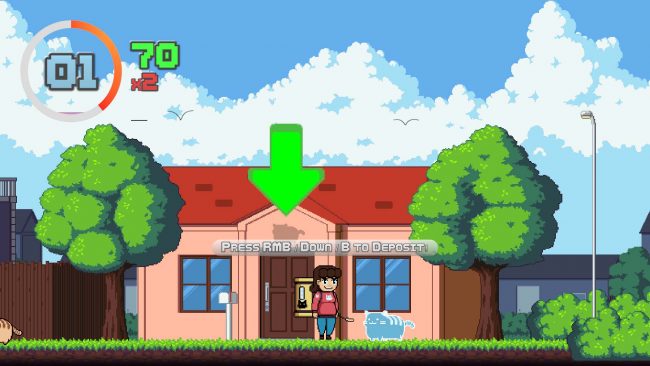 The graphics are actually very simple 2D. In this case though it’s actually extremely effective. It’s one of the cases where less is more.

While it’s not going to win any prizes for visual quality, the fact that the graphics are simple and don’t have too many distractions will help younger players focus on the goals of the game rather than be distracted by endless visual bling. While in some games I have been critical of the crudeness of the graphics, in Catnab they’ve got the balance about right.

If you’re after a game that it simple, free and suitable for younger children, this definitely is worth looking at. It would work well for this type of purpose, and as a game that targets a younger audience, it works extremely well.