Changing the Start Menu in Windows 11

I’m sure many people are now aware that Windows 11 has been released. One of the big changes in Windows 11 is the design and layout of the Start Menu. Any time that Microsoft changes this, people are split into two different camps. One camp seems to like the change, while the other seems to prefer leaving things as they were. These changes seem to have come under a lot more scrutiny after the changes made in Windows 8.

When I did my initial first look at Windows 11, I noted that it was a bit of a dramatic change. I did also note that it started to grow on me, noting that it just needed to allow for customisation of the location and the ability to remove panes that you have no need for.

There will still be those that don’t share that opinion, and that’s OK. They will have their reasons for doing so. While Microsoft aren’t likely to provide an option to restore the old Windows 10 Start Menu as an option, there are third party utilities that will provide some of the customisations people will be seeking. I’ve got one of those tools here to see what we can do.

Start11 is here to the rescue, to a point. This is currently still in Beta, but is available for purchase and download nonetheless. It’s neither free or open-source, but at less than $A8 it’s hardly expensive.

I should start by saying this is not a sponsored post. The team at Stardock have not provided me with a review copy. This is a copy I have paid for myself.

What options do you get?

Here are the basic options that you will receive when you install and activate the software. 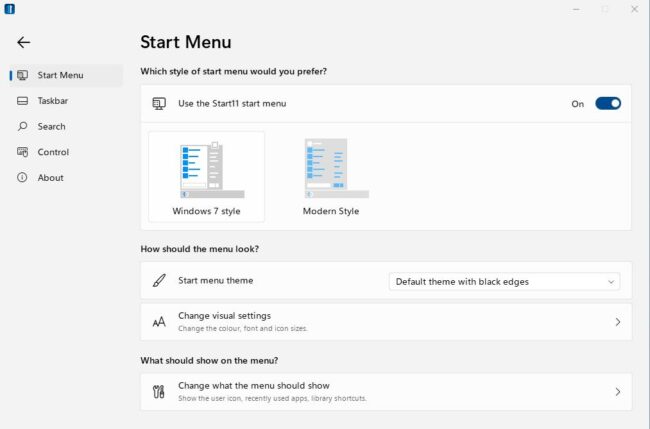 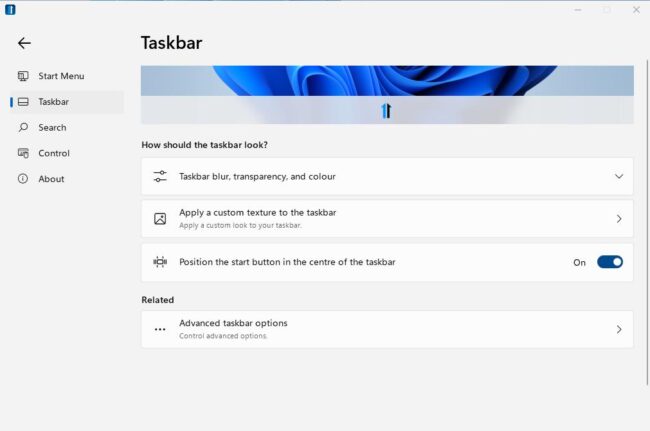 It won’t yet allow you to move the entire taskbar to a new location, but you do have easy access to an option to move your Start menu back to the bottom left-hand corner. Once installed and set up, it didn’t take me long to replicate this look, which is basically exactly what you had with Windows 7. 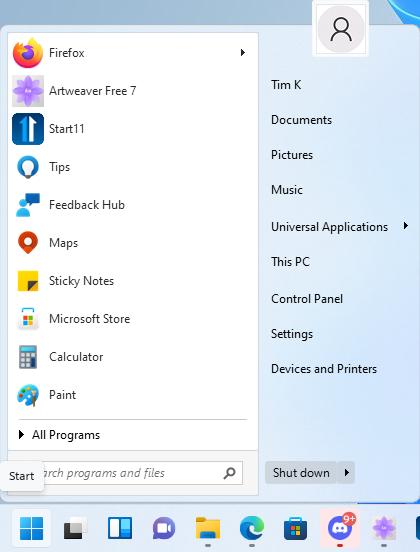 This is not all that you get for your eight dollars’ worth of software though. There are a number of advanced options to further customise the look and feel of the taskbar and Start Menu, including taskbar colouring, transparency, blurring, as well as removing menu categories that you don’t normally use. There is definitely some flexibility beyond a simple Windows 7 Start Menu that you can achieve with this, and gives you far more customisation options than your standard Windows options.

There are two things that I think are missing from Start11 that I would like to see in future versions.

One is the ability to move your taskbar elsewhere on the screen. While I tend to leave it at the bottom, there are those that prefer to place it elsewhere. This is one thing I didn’t pick up on initially when I looked at Windows 11, as it’s something I don’t normally do, but those that like to move their taskbar around I’m sure would welcome a return of this feature.

The other is to also allow the option to have a Windows 10 style Start Menu. I’m one of those people that liked both the Windows 7 and Windows 10 approaches, so I would like to have the option to select between either style.

What other alternatives are out there?

This particular tool is a commercial product that is open source. While the cost of the product isn’t particularly high, there are some people that might not be willing to shell out money to return their Start Menu to what it was in earlier Windows versions. The fact that it is closed-source might be a turn off for people who are Windows users who look for open-source software.

Some people may remember a product called Classic Shell, which was a commonly-used program that did the same thing for Windows 8 users. This was certainly a program I’ve installed a few times for those that wanted it. The program itself still exists, but was abandoned several years ago and appears to be no longer actively maintained. Being unmaintained, there is no guarantee that it will continue to work. If it does break, there’s no guarantee it will be fixed. That’s the risk with unmaintained software, so I would not recommend this option.

Open Shell is an open-source fork of the old Classic Shell which does the same thing for Windows 8 and 10 users. There are mixed reports about how well it currently works with Windows 11, though judging by their forums work is being actively done to try and resolve many of the issues. This doesn’t seem to be ready quite yet, but may soon become available for those wanting an open-source equivalent. And are willing to wait.

I have approached this article in a slightly different manner than I would some other articles. While some tech-tips I might approach from a more tutorial-like perspective, this article is really to point out that this type of software exists. It’s basically a nod to those that don’t like it when their Start Menu changes to let them know that there are options available.

If you’re looking for an option that’s available now, Start11 is not expensive and does a surprisingly decent job of restoring a Windows 7-like Start Menu. The only options it really needs to add at this point is another option for a Windows 10-like Start Menu and the ability to move the taskbar around the screen.

For those that want an open-source equivalent, Open Shell looks to be a contender. It looked for a time like they may have had some difficulties getting their product working smoothly on Windows 11, but a look at the forums seems to investigate that a lot of work is being done to make it work. This may become a more reasonable option fairly soon.

Given I now have a license, I’m tempted to make use of this once I finally take the plunge for Windows 11. I just hope they will consider adding some of the features I mentioned earlier.