I start this review knowing full well that I might be flogging a dead horse well past the point that I should. Not only have I reviewed a mobile version of Lemmings for Android, I am now reviewing another PC-based Lemmings lookalike from 2011 that’s been sitting in my Steam library for about as long as I can remember. I finally figured it’s about time I installed the game and give it a run, even if it is an older game.

To understand why I have Clones in my collection, we have to go back to when I was in early high school. This is the early 1990’s, and our family had invested in our first IBM PC compatible, a 386SX/16 with a whopping 4 megabytes of RAM and a huge 60 megabyte hard drive. One of the games installed onto that machine was Lemmings. I have very fond memories of sitting in front of that machine with a friend trying to safely navigate my Lemmings to safety.

This is what lead me to adding Clones into my Steam library, to try and relive those old days. It was basically a desire to tap into a feeling of nostalgia, thojugh the fact it took me some time to play it is nothing by my own laziness.

When I fired Clones up and started going through the tutorial levels, I was presented with a very familiar concept. Assign a clone a series of skills to try and navigate them safely towards the exit. This is pretty much the same concept as the concept behind the original Lemmings.

Despite the name, don’t think this is just a simple clone of Lemmings. While the concept is similar, the skills you can assign are very different, including “Gulping” either up or down (which is a form of drilling), Spin (a form of flying) and Atomize (destroy a clone to smithereens). The game basically takes the Lemmings concept and refines it and makes it their own. 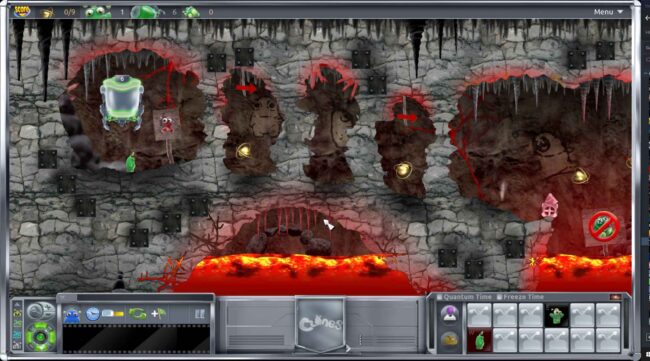 The graphics are simple, cartoony and effective. It’s a standard scroller, both side-scroller and vertically depending on the level. It is simple enough that the game should have acceptable performance on a very wide range of hardware, but done very tastefully.

The interface is also very straightforward. Select the Clone, give it a task to perform, and it just gets to work. There are options for both keyboard and mouse players, so many tastes are catered for in this game. It was extremely quick and easy for me to pick up.

Running through the tutorials was definitely fun, but I did attempt to break out of the tutorials and play the game proper. This is where I ran into a few hurdles.

When going through the tutorials, you are able to enter User Generated Mode. This wouild appear to be an option to download levels created by users. This presents you with a dialog box that allows you to scroll through the level packs to download, however it does not appear to let you install them. I was only able to get as far as the dialog below. 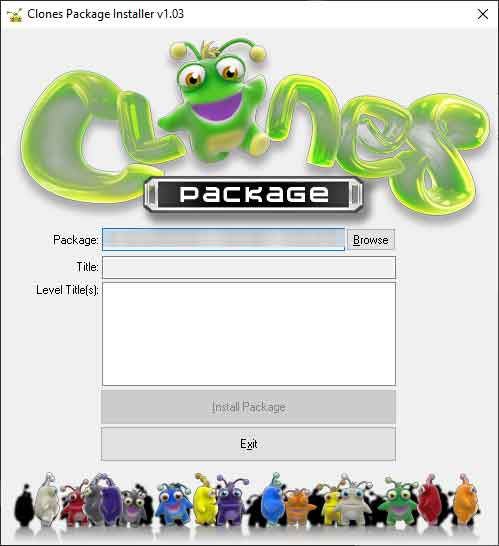 This is a disappointment. The appeal of many games like this is that you are able to submit and share your own content. This is one of the facilities that later games such as Golf With Your Friends makes extensive use of and makes the game such a success. It appears as though it has worked in the past, as there are levels available for download. This just adds to the disappointment.

I was somewhat more successful with the multiplayer options. This is enabled through the Tournaments options in-game.

I had originally attempted to find a tournament, which yielded noone playing at the time I was on. However the option to host a tournament still appears to work. This allows you to select the level to play, wait for others to join, and then start the game. The game also allows you to start the game even of no other players have joined. This still allows you to play the standard levels even without completing the tutorials.

So it would appear that the game servers are still up and operational and you can still host online multiplayer games. The option is stil lthere to turn Clones into a “party game” where people can get their friends together and solve the puzzles that are part of the original game. This is where rhe appeal of the game still lies.

Would I recommend this game? It depends on what you want to get out of it. The game is very low-cost, and the game servers still appear to be operational even though it is an older game. If you are looking for a game to add to a group gaming night, it might prove to be a great option, as the multiplayer options still appear to function..

I probably wouldn’t recommend it for solo gaming runs, as the ability to download the user-generated content appears to be not operational and the multiplayer servers seem to be fairly quiet. This is not surprising for an older game, but at the same time it is a shame the game did not have staying power because it had a lot of potential.

My reasoning for the 6 out of 10 game is that, while the game is extremely fun, at this point it would serve limited use outside of a cheap game to run outside of social gaming nights.