COG Back to the 80s Review

COG Back to the 80s came onto my radar as it seems to be a mashup of a few different genres. It seems to be part First-Person Shooter, and part open-world survival with missions.

The game itself seems to be an interesting mix-up of a few different genres. The reason I compared it to DayZ above is that there is an open-world survival element to it. The difference is that, while something like DayZ is an open-ended experience, COG Back to the 80s is based around a series of missions which gives you a bit of a storyline without you having to create your own. The basic story is that you will be looking for a terrorist. The game is split into chapters, and each chapter gives you a different set of challenges along the way and the ability to use different weapons.

This does sound a little vague. I would like for it to be less so, however at this point in time, the game description on Steam seems to be very hastily written

When first launching the game, there is a little bit of setup to get the graphics configured correctly for your system. You will also need to set up an account with the developers to be able to play the game.

This is where I hit the first glitch. When I entered the email address and password required to set up the account and then created it, it successfully created the account. However, the interface gave absolutely no feedback at all that this worked. It just sat there and did nothing. It wasn’t until I re-entered the details that it complained that the email address had already been used, and that’s the first indication that it had actually done anything. This is really terrible from a user experience perspective.

Going into the game, you have the opportunity to start a mission and run it either single-player or multiplayer. I suspect the Steam page will need to be updated, as this indicates the game is currently only single-player. For the moment, I’ve run it as single-player.

This is where you get to start playing the mission. This is where I found a couple of issues that ended up making the game a little painful. One was that when you have been attacked by an enemy player, they don’t make any sound at all. They also love to sneak up behind you, which means the first indication you have an enemy to deal with is that your health is dropping. This is compounded by the camera issues I describe below.

Another issue that I hit on more than one occasion is to do with the foliage. There seems to be a few areas with bamboo-like foliage that you get stuck in. By stuck, I mean it is possible to find yourself in, and the only way out is to exit the game and start over from scratch.

These issues gives me the issue that this game should really be listed as “Early Access”. These bugs suggest that the game is unfinished and there are a few quirks to be worked out. Hopefully the developers are going to work this out with a few patches, however the combination of these bugs, the bad user experience when setting up an account, and the vague information on the Steam Store page mean it’s a little too rough around the edges to be a production-ready game right now. Indeed, at times the bugs made the game unplayable. 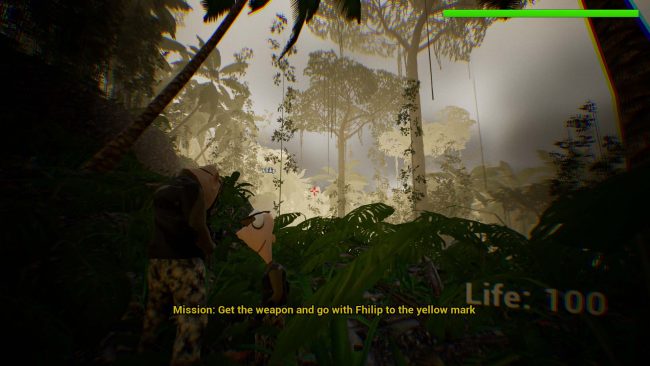 COG Back to the 80s Image

The graphics are, on the whole, pretty amazing. It’s not quite up there with something like DayZ, but they’re still very impressive. The game itself is actually very nice to look at.

The one criticism I would have is the camera. It seems to by default place itself somewhere to the right of your character as you’re walking, to the point your character is not actually visible at times. It’s also very jerky and by no means smooth. For those prone to such things, I could see this causing a few bouts of motion sickness. It also means, because of the issues with the enemy characters making no sound, it is possible for you to be attacked without seeing or hearing anything.

It’s disappointing that I’ve managed to hit so many issues. If they’re able to sort them out, this actually looks like it would be a fun little game.

At the moment though, the issues I’ve hit make the game almost unplayable and need to be fixed before the game could be considered ready. This is a shame because the game otherwise has potential.