I have been a semi-regular player of Crash Drive 2, having sunk a little over 80 hours into the earlier version of the game after it was gifted to me by a friend. When I came across the announcement and trailer while searching for material for this site. I was keen to give the new Crash Drive 3 a go and see if it had any significant improvements over the earlier game.

I should point out before we start, I have not been provided a copy for review by the developers.. I bought my own copy via Steam. I also do not receive commission for sales of the game.

So lets dive right in and see what we have.

It is difficult to pigeon-hole Crash Drive 3 into any specific category. It is a mash-up of a racing game and an open-world physics game. Rather than drive round a track as you would in a traditional racing game, you compete in short mini-events, where you earn money to be used to purchase better cars.

This is very similar in concept to the older Crash Drive 2. What has changed is the events that you can compete in.

Some old favourites are still included in this game, such as the Tag event where you tag objects by performing tricks in them, and the Race event which is essentially the same concept as a traditional racing game. These aren’t changed much over the old game. They don’t need to be though. These events had already been perfected in Crash Drive 2.

To give us something new, there are a number of new events which also increase the competitive and silliness factor. One new event that I found myself loving was the “Damage the Beach Ball” event. This is where a rather large beach ball bounces round the track, and the aim is to hit it in a way to “damage” it. The winner is the person who has done the most damage in the time allotted.

Another new event is the “King of the Hill” event. There are a number of “rings” that live at the top of various hills, a dn the idea is to stay inside the ring and kick everybody out. At regular intervals, the hill changes and you have to race over to the new hill and do the same thing. This was actually rather enjoyable.

These new events have definitely added a lot of fun to the game. Once I had started playing, I found it very difficult to drag myself away from the game, even though I knew I had a review to write. The new events within the game definitely captured my attention, and I felt a level of competitive behaviour that I did not feel in the old game.

One thing that I noticed was that the playing field in Crash Drive 3 appears to be significantly larger than the one that was used in Crash Drive 2, so there’s a lot more space. This adds to some of the challenge, particularly as you learn the layout.

Speaking of the track, there was one thing I noticed in Crash Drive 3 that seems to be a bit of a downgrade. In Crash Drive 2, it was very obvious that there was more than one track you could play on, however the later tracks were disabled until you had skilled up enough to earn them. In Crash Drive 3, I could not find any obvious indication that there were any other tracks. Perhaps as I skill up, more will become available to me, but if that’s the case it would have been nice to have that more visible as that would give you more of a reason to be competitive and earn the extra tracks.

Another worthwhile inclusion is the ability to play offline. This is only a single-player mode – you don’t have AI-powered cars to compete against – but it’s a good way for beginners to learn the controls without the competitive pressure of having other players around. 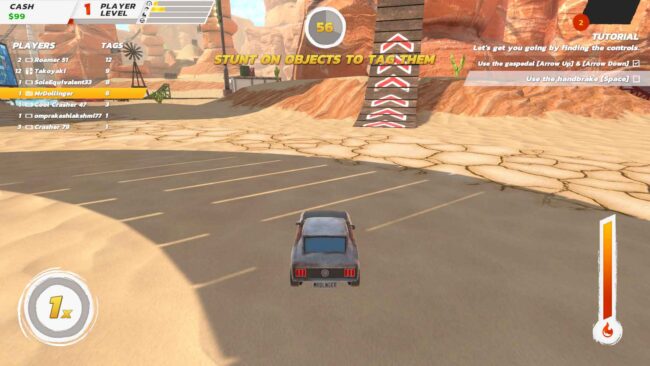 The graphics in Crash Drive 3 are significantly more detailed. The might not be up there with some of the AAA titles, however given the wide range of devices that Crash Drive 3 is intended to run on (including mobile phones), the graphics are particularly impressive. I loved what they were able to to improve the graphics while trying to maximise compatibility with less powerful devices.

My only annoyance is I could not find an easy way to turn the tutorial text off at the top right without completing all the things it requested. This won’t be so much an issue for new players, as it gives useful information on how to use the controls. However as someone who has spent enough time in the older game, it’s unnecessary and I would have liked to have an option simply to turn it off so it wasn’t a distraction from the gameplay.

Crash Drive 3 is a significant improvement over Crash Drive 2. There are a heap of fun new events to compete in, as well as significantly improved graphics.

I’ve only played half an hour so far, but I did find it very difficult to drag myself away to start writing the review. The only criticisms are around only having a single obvious track, and being unable to disable the tutorial text. This is basically what I’ve marked it down on. Hopefully future updates expand the range of tracks you can play on.

If you’re a fan of Crash Drive 2, the new version does still offer a lot of fun new stuff to make it a worthwhile purchase. For those wanting a racing game with a bit of a difference, this may well be a very good purchase.