Back in the days when I was running Windows 3.1 on 386 and 486 era computers, I was a massive fan of the Tetris game that came with the Microsoft Entertainment Packs of the day. Tetris is just one of those classic games that never seems to grow old, even if you’re like me and have the spatial awareness of a stoned elephant.

Cubytet is a very similar game. It is basically Tetris in 3D. Given how lacking my spatial awareness is, I wanted to see if I could make something of this game and see if it was worthy as a version of 3D Tetris.

Cubytet is very simple. As I’ve implied in the introduction, it’s basically Tetris but in 3D. It is basically a block placement game, where the goal is to create as many lines in 3D as possible.

Launching the game, you do get a few options to set. It does seem to set the graphics quality at somewhat conservative levels, so if you have more capable hardware, you may want to take that into account. Starting a new game, and you have the option to set two difficulty levels. I’ve stuck with easy, mainly because of my spatial awareness. That’s just me. But there is also a hard mode for those wanting more of a challenge.

The block shapes are an expansion on what you would get in classic Tetris. This is understandable, as the game is in 3D and you’ll want to take full advantage of that third dimension. This does make the game a little bit more complicated. You have an extra dimension to consider as you rotate and place the blocks, unlike classic Tetris which is primarily a 2D game.

One nice bonus is that you can change your camera angle. This is very much a necessity as you really need to be able to see the whole board from different angles. You do need to be careful when you do this, as the game speeds up as you go along. As the game speeds up, you will need to be quick in placing where the camera where you need it. It’s basically an issue of being able to think ahead and acting quickly.

The only thing that might catch you out in the controls. They’re not impossible, but did take me a little to get my head around, particularly when it comes to rotating your pieces. Your first few games might not go as smoothly as you’d like as you get used to them.

The game is actually quite challenging. This is partly because my spatial awareness isn’t brilliant. This is a good form of challenging though. It’s a game that you have to think about, and think quickly, and this makes it a bit more stimulating than classic Tetris.

While the game itself is fairly trivial to describe and conceptually very simple, this is exactly I would have imagined Tetris in 3D. The whole game has been put together extremely well. It’s challenging but in a good way and for those wanting a version of the classic Tetris game with a bit of added challenge, Cubytet does it perfectly. 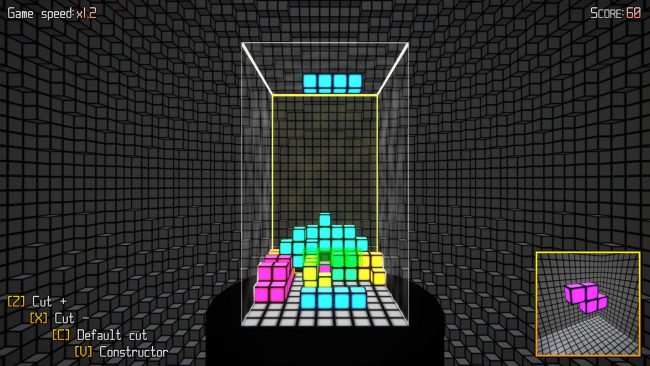 The original graphics for Tetris were actually very simple, and this follows on with Cubytet. This is a game that doesn’t need complicated blingy graphics, and the developers have done a good job at keeping it at about the right level of simplicity.

Some may comment that the background Is a bit blocky, dark and bland. In this case though, that’s exactly what you want. You need to have the bright colours of the pieces stand out against the background, and the contrast works well here.

Cubytet is an example of how to get the graphics right, and I think they’ve done a good job of keeping to the original character of Tetris while also making the game their own.

This game is exactly how I would imagine 3D Tetris would work. They’ve got this version pretty much spot on. Aside from the slight clumsiness of the controls and my own lack of spatial awareness, I can’t really fault any part of it.

If you’ve played Tetris in the past and wanted to reimagine it in 3D, Cubytet does that very well. The fact that it’s 3D adds a new lev