I’ve been meaning to look at a few more first-person shooters for quite some time now. They’re a genre I’ve never been particularly good at. I tend to get killed more often than I’d like, and as our friendly podcast host Qwerties can attest, I’ve been known for the occasional team kill.

Still, it’s hard to ignore the popularity of franchises such as Call of Duty and some of their counterparts. CyberBorn is a new kid on the block of what may be an already saturated market, but I think it’s worth sometimes looking past the big names for something a little different.

CyberBorn is in some ways a fairly bog-standard FPS. It is built using the Unreal Engine 4 engine. The principal is fairly simple. There are two squads representing different and you have four different game modes.

There is Rush, where you have a particular objective to either destroy or defend an object. Tean Deathmatch is a fairly traditional FPS where the goal is to kill your enemy. Capture the Flag is the traditional game of capturing the flag and bring it back to your home base. There’s also a free-for-all, which is a last-man-standing shoot-em-up.

There are a few little gotchas that you should be aware of before you get started. One unusual quirk is that even in single-player, the number of bots on each side is set to 0. That means on the default settings in single player, you have no bots assisting you and there are also no enemy players. That caught me a little off-guard at first, and it took me a moment to figure out why I had the entire map all to myself. It’s a bit of an unusual default.

The other gotcha is that multiplayer seems geared more towards LAN play rather than online play. This will be a challenge if you want to play with friends in other locations. The upside is that you don’t have to deal with game lobbies full of 12-year-old children screeching racist and homophobic insults at each other. There are workarounds if you want to get a little bit technical that involve setting up VPNs between the different locations, but this is likely to be far too technical for the average casual gamer and may add security concerns, so this may factor in to any decision to add to your multiplayer arsenal.

On the plus side, the gameplay was exceptionally smooth. Having played Rainbow Six: Siege previously, CyberBorn is a lot simpler to get your head around. There’s no breaking through walls or doors, it’s just run around and shoot. They’ve obviously targeted this game slightly more towards beginners as well, as I found the sensitivity of the controls made it easier to aim and get kills. They’ve obviously made this game with casual gamers with more limited FPS experience in mind. While I wouldn’t describe the game as easy, the fact that it’s not as full-on as something like Siege makes it a little bit more enjoyable.as a casual gamer as you can get into it far more quickly.

Where I see this game excelling is for those wanting to seek a single-player experience without having the hassle of juggling random squads or having to coordinate with friends. Those looking for those online experiences are probably going to be disappointed as they are not here in CyberBorn. But those wanting to avoid might find something here. 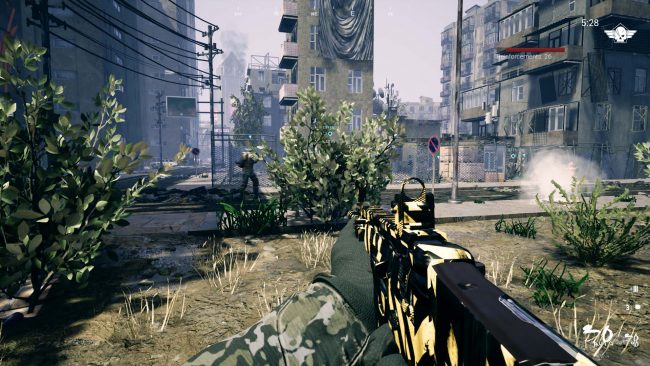 This is where it really shines through. While I haven’t played much Call of Duty myself, I have seen other gamers stream it. The graphics there are definitely not terrible.

I would rate the graphics here at least as good as Call of Duty, if not better. Even on my lowly 1660TI, the game looks incredible. I definitely appreciate the art style and the level of detail that has gone into the graphics.

The graphics are really quite impressive particularly as CyberBorn is a cheaper game, They’ve put a lot of effort into making this right.

Having said that, that does bring some upsides. If you’re looking for a Call of Duty style game that you can play as single-player, this may well be a good option. This is particularly the case if you don’t particularly want to wait around for the online systems to pick you a decent lobby and have to put up with in some cases some fairly obnoxious behaviour that occurs with some games. Though if you’re looking for an online experience, you may be better off staying with one of the more established franchises that already has this functionality.