I’ve taken to reviewing a few car racing games of late. I’ve been wanting to build this library of games to try and explore what the genre has to offer.

Demolition Race came to my attention as it is more of a demolition derby style game rather than a straight racing game. If I’m going to explore this genre, I may as well have a look beyond the standard racing games to try and get more of a feel for what’s out there. Demolition Race looks like it targets just about any PC that’s out there, so may be a good option for those that don’t have strong gaming PC’s. Let’s see how good it is.

The game play is remarkably simple. When you start a game, you start competing against three other cars. The goal is to do three laps, dodging the other cars so that your car doesn’t get destroyed, and hope you make it to the end of the race.

Like many other games of this style, completing a race earns you money which you can then invest in upgrading your vehicle and purchase nitro packs to increase your power temporarily when needed.

The game itself really isn’t complicated at all. Though the mechanics could use a little bit of improvement, as I’ve een a few oddities.

The first improvement would be to do with car handling. While the speed is fine, the steering on your car can best be described as very sensitive. I know this is a demolition derby style game, and the whole point is you’re crashing into each other, however I think this is just a little overdone. It makes the cars a little bit too difficult to control, to the point my first game was spent mostly half way up the hill because steering it back to the track was proving to be challenging.

The other game mechanic that I think requires improvement revolves around the number of cars. Races typically only have four cars. I suspect this has been done for performance reasons, to keep with the low system requirements. The downside is that I’ve run a few games where the other cars have destroyed themselves, so you’re really only competing against yourself at that point with all the destruction taken out of it. This could be improved by allowing you to change the number of cars you’re competing against. That way those with lower performance PC’s can still run the game, but those with more capable PC’s can have a more enjoyable experience.

Otherwise, the game mechanics are very much on point. It’s a fun little time waster and, given races are short, it’s one of those games that you can sink as little or as much time into as you want. I suspect though that it may be a game some will get bored of quickly, as the games run fairly quickly, and with the game mechanics you don’t always get the full demolition derby experience. 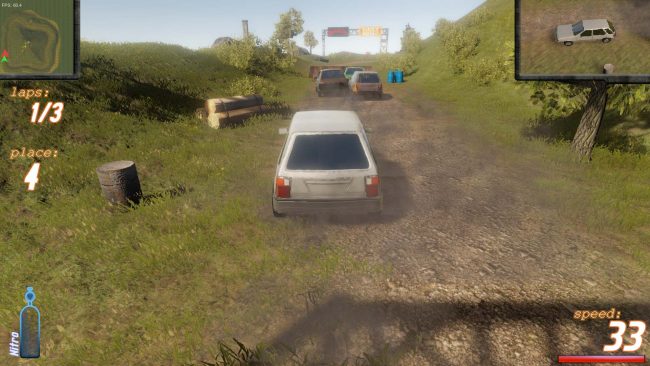 The graphics situation would best be described as simple. It’s definitely not the worst graphics I’ve seen in a racing game, but given they’re targeting just about every PC that exists right now, the graphics have been extremely simplified.

That said, I think this may have been taken a step or two too far. I am aware they are setting the minimum requirements very low and hence need something that runs on a wide variety of hardware and still be playable. The graphics as they are tend to look a little bland. I just think they could aim for very slightly higher specs and still cast a very wide net, and in doing so will allow them to just have a little bit more detail, particularly in the vehicles.

Demolition Race is a game that I can see having potential. Where I think it falls down is that the graphics are a little disappointing, and the limit of four cars per race means that some players might get bored of the game fairly quickly.

If the developers can fix these, I think this would be a vastly improved game, and the changes could be quite easily made by allowing for more options to customise the game for those with more powerful machines.

As it is, I’d describe it as a middle-of-the-road game that just needs a few tweaks.