Escape from Dufo caught my attention as a low-cost horror-style puzzle game. It struck me as an interesting combination. It seemed to have a very spooky looking atmosphere with a bit of added puzzle-solving thrown into the mix. It also seemed to be a game that you could run through very quickly.

To me, this seemed a great combination. Given the low cost, I wanted to see how well this combination could be pulled off.

The basic game is relatively simple. The game is set in a dark dungeon. The goal is to solve a series of puzzles. Once each puzzle is solved, a new door opens, opening up the next part of the map and the challenge. Once you solve all the puzzles, you’re set free from the dungeon.

One of the appeals of the game is that, if you’re good at solving puzzles, it can be solved extremely quickly.

The controls for the game are relatively easy to get the hang of. You basically click on an object to pick an object up, and then let the mouse button go to release it. You have the option to rotate objects as well. The only slight quirk I found was that, due to the darkness of the environment, it was sometimes difficult to drop an object exactly where you wanted it. On some occasions, you might need two or three goes to drop an object in the right place because you realise you’ve missed your target. You could argue this is part of the challenge, so this is only a relatively minor gripe.

The other thing to point out is that the clues you get for solving each puzzle changes for each puzzle. The first puzzle for instance you get a cryptic signpost to give you clues as to what you need to do, while the next one you are given clues via various particle effects. This chopping and changing might be somewhat frustrating for someone who struggles with solving cryptic puzzles. I would have liked to have more signage with cryptic clues to help keep it consistent and provide some sort of instruction as to what you need to do. Having said that I understand they’re sometimes difficult to write, and the point is that you’re supposed to be able to solve puzzles. I just suspect some of the choices might confuse a few people. They can’t make it too easy, and you do get a sense of achievement once you solve a puzzle.

Having said all that, if you’re prepared to stick with it and are good with problem solving, it’s actually really well done. The game is definitely challenging, but it’s also designed to be quick. It’s not a game that will drag on for hours. Once you get your head around it, it’s also quite a bit of fun. The only thing I think this game needs is to be part of a larger game. I noted in my Faded Grey review that the game was a promotional tool for a larger project, I would have liked to have seen the same here. This would have given you the option for having a quick game to play quickly, while also having a larger game if you wanted to continue that storyline into a bigger project. The game is done well enough that it could be included as part of a larger narrative, each game being a different part of the story. 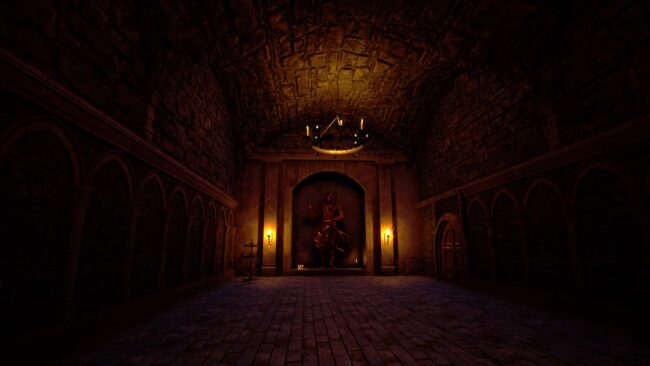 The graphics are actually very well done. They’re simple, yet extremely effective. They do offer an atmosphere that befits the game.

The only comment would be that it is occasionally a little too dark. As I noted above, that sometimes causes problems with accurately dropping an object. It’s sometimes very easy to miss your target and you do sometimes need to make a few attempts to do what you want. Perhaps being able to carry some of the candles that can be found at the start of the game would solve this.

The graphics are otherwise a really good balance. It’s not crazily over the top, and the environment really fits the game style they’re going for. It’s detailed enough to give you a good visual experience, without being so over the top that you get caught up in unnecessary visual clutter.

As a short-from game, it’s done really well. If you’re good at solving these types of puzzles, it’s a game that can be played quickly and it doesn’t really drag on for hours.

It would have been nice to have this as part of a larger game, similar to what Faded Gray have been planning. This way you can have the option of having some short-form content that you can play if you don’t have a lot of time while having a larger project if you want to invest some more time into the game.