Espresso Espresso has been sitting in my game library ready for review for a few weeks now. I’m a little bit late to the party because somehow life always seems to get in the way of writing reviews. Given the love of coffee from a few people I know, I thought I’d give the game a chance to see what it has to offer.

The game describes itself as a “coffee shop” management game. It does seem to have a slight retro feel to it.

Launching the game and you don’t really have very many options to set. In fact, there aren’t really any at all. While it’s good to have at least some options you can set, I do also like the trend in some games towards simplicity. It does lower the barrier to entry for those that don’t necessarily have the technical knowledge to understand an overwhelming barrage of options.

Starting a new game, you get to give your café a name and choose whether it is a Corporate or Community coffee house, though the game doesn’t really explain the difference between the two. You also need to select the amount of your initial loan

Going into the building phase, and things get a little bit confusing. You have a number of different tile types to choose from, and you can drag and drop them to place them on the grid. The problem is the tiles aren’t exactly labelled, so it’s difficult to work out what exactly you’re building. I wouldn’t exactly describe that as user friendly, as it makes it very difficult to work out what you’re actually building.

Trying to go through the menus to do just about anything else seems to be clumsy. I have yet to be able to successfully build an actual coffee menu because the menus don’t seem to work as intended. Building a Coffee under the Coffee Creation tab and clicking Add Item once you’re done and …. there’s really no obvious way of selecting what you’ve just created to add it to the menu.

Essentially this looks like it could have been a good game, but it is being held back by a really terrible user interface. They really need to find someone who is experienced with user interface design and completely redo it because right now it’s so bad I find the game unplayable. 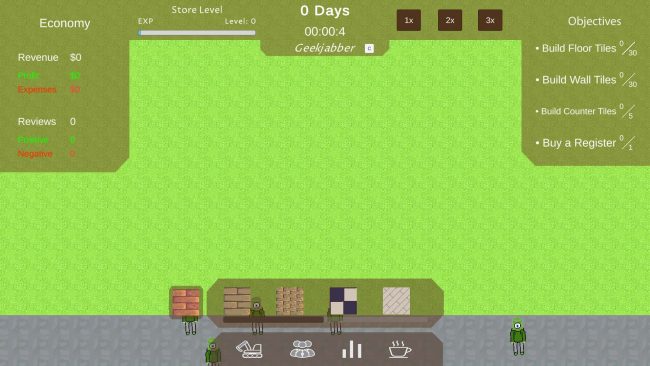 The graphics are a distinct letdown as well. They’ve obviously wanted to aim for a very retro computing feel, but this has fallen flat.

By flat, I literally mean flat. There is no depth to the graphics at all, they are just boxes with textures on them. Add this to the blocks being completely unlabelled, there is no way of telling whether something is a floor tile or a wall tile until you see the counters go up under the list of Objectives. This is really not intuitive at all, and just looks awful.

I’m trying really hard to be charitable with Espresso Espresso, but I’m finding it hard.

It’s a great concept. It just suffers from a really terrible user interface and some very amateur graphics.