Over 12 months ago, GeekJabber published a retrospective of the game Wolfenstein 3D. This article revisits a very early and primitive example of 3D gaming on the PC platform. Wolfenstein 3D is surprisingly available for purchase on Steam more than 30 years after it was first released.

With the increase in interest for these retro titles, I’ve been hoping to find something that triies to capture the essence of these early 3D FPS games. While Extraneum has technically been out a few months now, I have only recently discovered the game. Somehow this escaped my attention. Being Early Access, it is still in active development, but is already surprisingly playable.

Extraneum describes itself as an old-school, sci-fi single-player first person shooter. This would be a fairly accurate description.

The game itself is divided into levels. Each level you must explore the map, shoot the enemy characters, find the secret hiding places and then proceed to the exit to take you to the next level.

There’s a reason I brought up Wolfenstein 3D in the introduction. It is quite clear that this game was the inspiration for Extraneum, as the game mechanics are very similar, even if the storyline is very different. There is just somewhat more of a focus on finding the secret locations as you may not be able to complete the level without them, unlike Wolfenstein where you can treat them more like a side quest.

The only thing I would mention is if you’re like me and have difficulty navigating, you may find it easy to get lost in Extraneum. This is a common issue with games of this style, and isn’t necessarily a criticism of Extraneum, more a commentary on my inability to navigate. It is something you may need to take into account though.

Extraneum has these game mechanics down fairly well. The enemy characters are surprisingly easy to kill, however as you proceed through the levels, you will need to content with more of them. It is this that makes the game increasingly challenging as you go on.

As you proceed throughout the game, you will be able to obtain weapons and armour upgrades as well, which adds to the experience.

The game mechanics have been done exceptionally well and the game is surprisingly well put together. The only issue is, being Early Access, not all content is available yet. Only the first ‘episode’ is available, though I’m sure with more game updates, the extra episodes will become available. 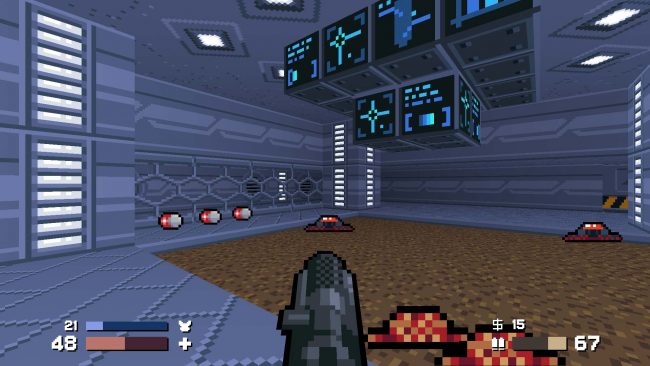 If you’re looking for extreme realism and stunning photo-quality visuals, you’re not going to get that with Extraneum. But that’s hardly the point. Extraneum is intended to to try and capture the retro look of early FPS games such as the Wolfenstein game I mentioned in the intro.

Extraneum captures this perfectly. It captures the aesthetic of these games really quite well in all their pixellated glory while also stepping it up enough to take advantage of modern computer power. They’ve got the balance between these two very much right. The graphics will definitely appeal to those that reminisce about those early games.

I have always wondered what a modern interpretation of a game like Wolfenstein 3D would look like. I think we may have found it. The game very closely captures the look and feel of the original game while updating it slightly now that we have far more modern hardware. The gameplay very closely follows how Wolfenstein was played, but updating it slightly to make it its own.

If you’re looking for a more modern take on that style of game, this is very much a game worth investing in.