Faded Grey is a short promotional game published by Derek Golliher. It’s designed as a freebie game to act as a promotional tool for their larger Gate to Site 8 project. It’s a version of find-it style puzzle solving game with a bit of story-telling that is designed to be completed in around 15 – 30 minutes.

The compelling price and the story-telling nature of the game caught my interest, so I thought I’d give it a chance.

The gameplay for this game is interesting. You play a character who has suffered a childhood accident. The game is basically an elaborate game of hide and seek to find clues to work out what that childhood accident was. You start your hunt for particular objects around the house, each one adding a piece to the story.

Launching the game, it’s actually done really well. It’s fairly simple to explore the area and find items to interact with. This can be simple objects such as turning a light on or off, picking up and using a flashlight, or some clue for the storyline.

One thing to watch out for is that the object shown in the top right-hand corner of the screen is the object that will provide the next clue that is part of the game. There are seven different objects to find, and they will all form part of the story. Of course, you also get to interact with the objects you were trying to find.

What I like about this is that it is relatively easy to get the hang of. It’s basically a storyline linked in with a game of hide and seek. With the play area restricted to the house area, there are no large areas to cover, so the game should be fairly quick to play. The appeal is its sheer simplicity of gameplay and the speed it can be completed.

I’ve done a few play throughs and I have found that some items moved location, so the map is not exactly the same each time, meaning you can have a few run throughs and not have it play the exact same way this time. This adds a certain level of replayability and variety, although the story is still largely the same each time. This just adds a level of problem solving should for example you want to demonstrate the game to someone else. Having said that, it’s not a game you will repeatedly be playing by yourself. 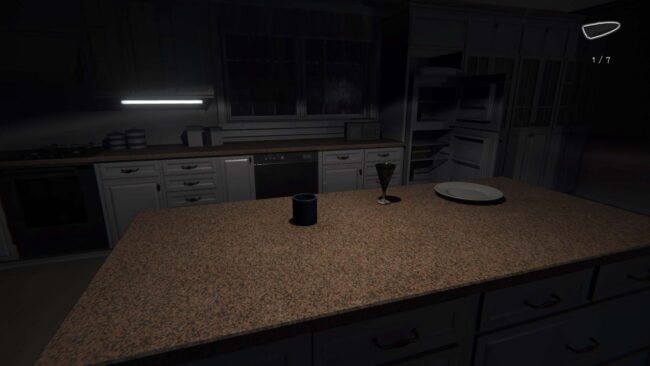 For a freebie promotional game, the graphics are really very impressive. There is a certain spooky aesthetic to the game which is enhanced by the games lighting style and graphics. This is actually very well done given the free nature of the game.

The voice acting is similarly well done for a freebie game. It’s not quite as expressive as some others I’ve heard, but it is still fairly acceptable. It certainly doesn’t sound forced or awkward, it just occasionally sounds like it could be a little more expressive. It sounds to me that part of it is that it’s slightly over-compressed sucking a little too much of the dynamic range out of the speech, making it sound a little flat at times.

The quality of the background audio is simple, yet effective. It adds a somewhat spooky element to the game, without absolutely overdoing it. is a simple atmospheric soundtrack that is very tastefully done

The game achieves a very good balance of visual and audio quality. The voice acting is really the only thing that could use a bit of improvement. Having said that, it’s a fairly trivial gripe, it’s certainly quite passable and definitely not the worst I’ve heard.

If this is the quality of the freebie promotional game, I have high expectations of whatever game Gate to Site 8 is to become. Faded Grey is really an excellent example of a promotional game done well.

While it certainly isn’t a game that’s going to keep you engaged for hours at a time, it’s not supposed to be. It’s just a short game designed to provide an insight of what’s to come with their main game. As a proof-of-concept, it does this very well and this should translate very well into a final product if they are able to maintain the same standard,