Flappy Bird was a major hit in the mobile gaming arena several years ago. It got quite a following, until the developer became a little bit overwhelmed and decided to pull the game, disappointing many fans.

Flappy Butt seems to be a slightly different, and cruder, take on the game. I thought it worth visiting just for the crude factor alone. There’s nothing quite like pandering to the immature five-year-old in us all.

The game is fairly simple. You are control of – for want of a better term – a huge naked arse. The idea is to use controlled farts to keep it at the right height to get between the gaps in the constantly approaching columns. It’s basically Flappy Bird but with an arse.

To say that the game is not without its quirks would be an understatement though. While the concept is good, I came across a few quirks while trying to review the game.

It should be noted that once you hit the ground, it’s game over. That much is quite understandable. However, one minor irritation was there seems to be something sucking your arse to the ground. It’s almost as if the settings they’ve set the games physics a little incorrectly, and gravity is sucking your arse to the ground. This makes it very difficult to play, even on easier difficulties.

One other notable “feature” is that, if you try and compensate by trying to lift your arse too high right at the beginning of the game, you float off the top of the screen. The screenshot I provide below is taken 30 seconds after I’ve done exactly that, and there’s no way to recover. Your arse disappears, and you don’t score any points, the game just scrolls along endlessly. You basically have to ALT-F4 and start over.

This is another one of those games that just seems to be unfinished. There’s a certain novelty to the game, and that quickly wears off once you realise how buggy it actually is. It comes across as a very early beta, and probably should have been released as Early Access. This is a shame as, given how popular Flappy Bird was for mobile, this version should have been a hit.

I did manage to come across the game’s Kickstarter campaign.  It does seem that, from the promo video at least, it seems to be a way of the developer learning game development. This makes the issues I’ve experienced somewhat understandable, however I would still think it more appropriate to still mark it as Early Access so that at least potential purchasers would be aware there may be a few bugs to be ironed out, and then release updates as the bugs are found. 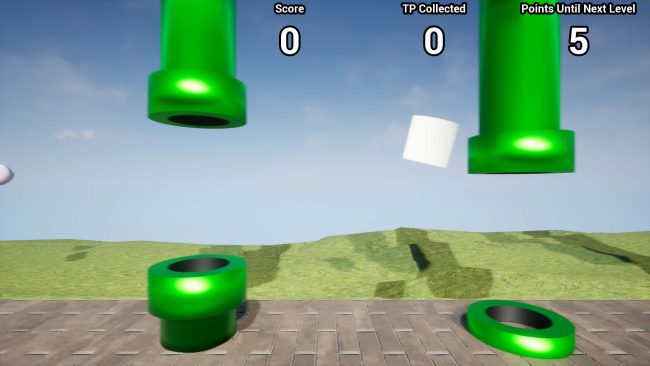 As noticed above, this screenshot reveals one of the bugs that I’ve stumbled across. As mentioned, this is a little bit annoying.

Having said that, the graphics otherwise capture the aesthetic of the original Flappy Bird game quite well. The graphics are pretty much otherwise spot on. These are one area that have been done particularly well given what Flappy Butt sets out to achieve.

I didn’t really want to mark this game down, as it seems to be coming from a person who is learning game development. The concept itself seems solid, and if I hadn’t hit the annoying bugs, it would have been quite a good little game. If these can be fixed, I think Flappy Butt has potential.

There’s still a part of me that thinks this should have been released as Early Access, as there are still quite a few bugs apparent that negatively impact gameplay. They are probably easily fixed and a few updates would probably solve them, but marking the game as Early Access would at least allow people to be aware that the game might still need a bit of work.