I have recently written a review on DashDash Delivery. Even though the game had great educational potential, the game was not one of my better gaming experiences. I wanted to give this specific genre of game a second chance though, as they seem like a bit of silly fun if they are done well.

This one came on my radar as a newer game that was of a similar style, but with less of an educational aspect. I’ve now added it to my collection and have given it some play time t osee if a game of this genre can be done well.

The game is reasonably simple. Each game lasts six minutes, and you will be playing in a game of up to 11 players. The goal is to make as many food deliveries by bike before the time is up. You earn points and money for each delivery, which you can use to further upgrade your bike.

You also have access to a second game mode, where you are competing against yourself in a time trial. This is where you need to make a single delivery in the fastest time possible.

Both game modes include various power-ups. They include food to help keep your stamina up, horns to move nearby vehicles out of the way, and rockets you can aim at your fellow riders. These can be an enormous amount of fun, as you can essentially sabotage your fellow delivery riders in a spectacular fashion.

The one thing I did notice at first is the bike is a little difficult to control and has a particularly wide turning circle. It did take a game or two to really get used to how the bike handled. The turning circle was particularly difficult to get used to. This is a game where you do need to go through a few upgrades to get your bike handling well. Once you’ve gone through a few games and done a few upgrades, the bike handling really starts to improve.

Once I got the hang of it, the game was ridiculously fun. The premise is really rather simple, and gets very addictively fun. You wouldn’t’ think that such a simple premise was so fun. It also has a certain silly feel to it – the physics when you hit another object such as another vehicle can be a little weird, but in a fun way rather than a game breaking way. At one point, I was riding along the roof of a bus.

Once you get into it, it does strangely capture your attention. I was struggling to put down the keyboard once I got past the initial hurdle of the bike’s handling. This is a game I can see myself coming back to. 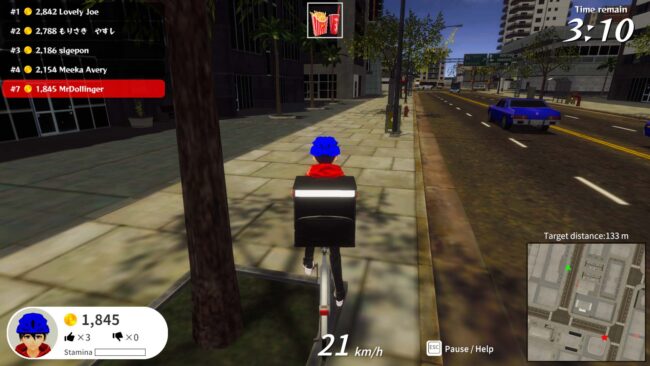 Like many games targeting lower end hardware, the graphics have been somewhat simplified. I have commented on this quite a few times in the past, noting that some games do this better than others. It is entirely possible for graphics to be simplified and still look good, though some games don’t do this particularly well.

The graphics here are actually done reasonably well. They’re not super detailed. They’ve got a very late-90s cartoony feel, with more than a slight hint of anime. They might be simple, but they work really quite well.

This might be me showing my retro-computing interest through, but I actually liked the art styles of some of the games that were common during the early to mid 90s. They’re obviously not much of a challenge for the current generation of hardware, but then can still work fine. I do like that there’s a revisiting of the “simple but effective” graphics as when they’re done well, they can still look really good.

In this case, it actually works very well. Any lack of detailed is more than made up for by the silliness inherent in the gameplay.

This game is really rather fun. It did take a little bit to get the hang of because the vehicle physics can be a little difficult to control.

Once I managed to get some upgrades in, that started making the bike handling a lot easier to control. This is when the game actually started becoming very fun. It’s a very simple concept, and the physics actually made things really interesting. Once I got into it, it was really difficult to stop playing.

I can see myself sinking some more time into this game. It’s a good balance between a simple conceptm fun physics, and retro-like anime graphics which altogether make a great experience.