People who know me know I have an interest in vintage computing. My first foray into the land of the PC-compatibles was in 1991, when our family took possession of a 386SX/16 running Microsoft Windows 3.0 and MS-DOS 5.0. This was the first version of Windows to include the card game Solitaire. While some may see this as a trivial little diversion, it did help many novice computer users of the day develop their basic mouse skills.

Modern versions of Windows now include the Microsoft Solitaire Collection, which not only include a far more refined version of Solitaire. You might then wonder why I might not test this version. I did want to see if someone else was able to produce a reasonable alternative.

This game is Free on Steam, so qualifies for inclusion in our Free Week theme.

There really isn’t a whole lot to say here. When you start a new game, you are presented with a fe options. You have the option to Draw 1 or Draw 3 cards, which works in the same way as the Windows version. You have the choice to play a game which is known to be winnable or a random game, and whether your game is timed,

The game itself follows standard Solitaire rules. The aim is to end up with each suit of cards stacked in order at the top. You will need to use the stacks of cards below to help build these stacks, and moving cards must be in order but alternate between red and black suits.

In this sense, it does follow a very similar pattern to the Microsoft version. This is expected given the real-world card game it is based on. It does offer a few differences though. For instance, it does have the option to only select from games that are known to be winnable. If you’re looking for a more beginner-friendly version of the game, this would definitely be a selling poitn.

The game does include controller support as well, although I do not have a controller to test how well this works. This version also allows you to resume a current game, for those times when you get distracted by something more pressing.

The game does therefore offer a few options over the Microsoft Solitaire collection. Given the reputation the Windows version is known for teaching people how to use a mouse, the controller version could very easily be used to help you learn how to use a controller. I can see its potential in this regard.

The fact that this works on Linux and MacOS also demonstrates a commitment to cross-platform support, whereas the Microsoft version is obviously intended for the Windows platform. 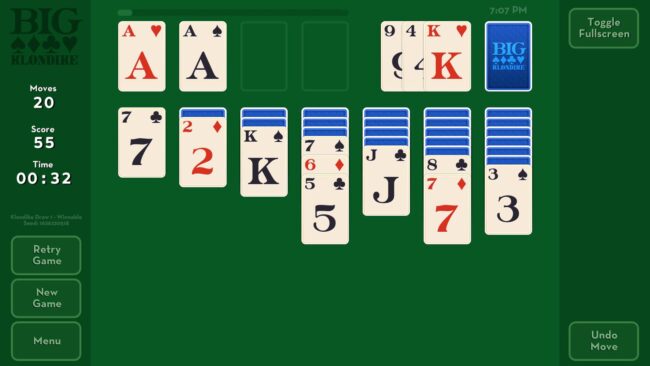 The graphics are a lot simpler and less polished than the Microsoft version. In previous reviews, I’ve noted that this can either be a good thing or a bad thing depending on how well it is done.

I would have liked to see it a bit more refined. After all, it is competing against the Microsoft version which has been around for long enough to have some rather impressive graphics. It obviously shouldn’t’ be a complete clone, the game needs to have its own visual style. But stepping it up a level or two I think is warranted.

Having said that, the simplicity does mean that you do not get distracted with unnecessary detail. If the graphics are updated, I would like it to be done in a way that retains this distraction-free gameplay. The game really just needs a bit of spit and polish.

The old classic Solitaire is one of the things Microsoft has been getting right for a very long time. The developers of Big Klondike would have a hard time competing with such a polished version that’s been available for decades.

The visual style I think needs to be stepped up a level. While it does allow for distraction-free gameplay, it does lack the polish of the Microsoft version. While there’s nothing wrong with the layout, is is competing against the likes of the Microsoft Solitaire Collection which is far more polished.

Where it separates itself is its support for controllers and its commitment to being multi-platform. If you’re looking for a game that allows you to develop your skills with a controller, this might be a good option, in the same way that the Microsoft version was used to develop mouse skills. If you’re looking for an option to run on a machine that isn’t running Windows, this would be an option worth investigating.