A trap with running a site like this where you write a large percentage of the content you produce covers games that fall into a fairly narrow range of genres. I feel that has happened a little recently where I’ve been covering a lot of puzzle and racing games fairly heavily of late. That’s somewhat understandable. They’re genres I have wanted to explore further. I think it’s time to do something a little different.

This game is something a little different. It’s a point-and-click adventure game with puzzles that seems to be targeted towards something that parents would want to play with their kids. Lets see if this concept has any merit.

As a free game, this is a prime candidate to include in our Free Games week.

The gameplay is fairly simple. You wake up in the bedroom of Jerma, who is a game streamer. Jerma wakes up late for the start of one of his broadcasts, something he has apparently come quite good at. It is your job to solve a lot of puzzles to get Jerma ready to stream.

These puzzles include getting into the computer room, then realise you have a lot of chores to do, and then do them before starting to stream.

From what I can tell though, the game is actually based off a real streamer. I’m not particularly familiar with their work, it does seem to offer more as a game for their fans in terms of in-jokes. I don’t actually mind this. It does seem to fill the need of a quirky little promotional game as a promotional tool and to have something for the streamer’s fan base.

As an outsider, I’m not sure it would work well purely as a marketing tool. It is a particularly simple game, which isn’t necessarily a bad thing. However, some of the humour is a little on the cringey side. This may be something that makes sense to someone who is already part of Jerma’s community, even by my standards it’s a little too cringey.

There is an opportunity here that seems to have been missed. While it doesn’t necessarily say so in the game’s description, it does seem to be something that could work as an educational game. While it does have a few subtle references that are more adult-friendly, the puzzles are relatively straight-forward, and has a very simple point-and-click interface. It has a few educational themes, such as teaching problem-solving and the importance of doing chores, and an interface that would be fairly easy for a kid to navigate. It comes across as a game is intended for parents to play with their children. It’s not a particularly complex game.

I don’t think this is a bad thing at all. One of the big early multimedia games was a game called Just Grandma and Me. While this doesn’t follow quite the same formula, games of this type can be important tools in childhood development.

It is a shame that they don’t push the educational settings outside of that because, while I think providing something for your fan base is good, this game could be used as an educational tool (perhaps with one or two of the adult themes removed). After all, as an outsider to this particular streamers’ community, this was very much the first impression that I got. It might be an opportunity worth pursuing. 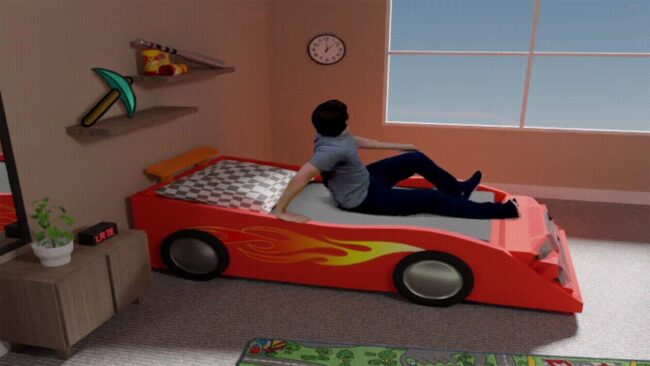 There is a certain simplicity to the game’s graphics and animations. It was this simplicity that first gave me the impression of being a game for kids.

In this respect, the graphics work well enough. As a quirky game for a community game, it also works well enough. This is obviously not a game that’s designed for people to be stunned by the exotic scenery, and given its target market it probably doesn’t seem to be.

Having said that, I would have liked to have seen some slightly more natural looking animations. There is a certain sillyness about them which is good, but there are times where they become so awkward they go full-cringe.

I have mixed feelings about the game. The game is designed for the fan-base for a particular streamer, and I’m sure it serves that purpose well.

Having said that, I think there is a bit of a missed opportunity. Without knowing the games target audience, it gave some very strong vibes of being a game aimed at children that has a certain educational aspect to it. To not promote it as such I think is shame. It could work so well.

As a game that serves its purpose, I think it works quite well. Unless you’re part of the streamers fanbase, or for those intending to repurpose it for educational reasons, I think it may be a game people will look past.