When I started using computers, the Commodore 64 and other similar-vintage computers were a very common sight. Games back then were relatively simple, because they had to be. The limited resources in these machines placed severe limitations on what was possible, and game developers would frequently try and push these machines to their limit to provide the best gaming experience they could.

While I was searching for games to include in GeekJabber’s free week, I came across this Snowboarding game. This seems to show that simple games still make their way into the world. I thought I would give it a chance to see how well it stands up. Given it’s a free game, it nicely fits with GeekJabber’s Free Week theme this week.

Snowboarding is a very simple game. You are on a snowboard, and you need to make your way to the end of the course before your time is up. It’s a case of rise, repeat. Each course will add additional obstacles to make the course more difficult and interesting.

One thing that sometimes takes a moment is that going straight down the centre of the course isn’t going to get you through the course. The tracks are long enough that you will fall just a little bit short when your time runs out. There are flags towards each side of the track that you need to aim for which will add a certain amount of time to the clock. It took me a moment to realise this, but does add a level of strategy to the game.

The simplicity of the game is actually quite appealing. It’s sometimes nice to have a game where you can just get in and play without getting caught up in complicated game mechanics and rules. I do like this part of the game.

There’s one thing I did notice. One thing the game description notes is that the physics placed on the board limit the speed to a maximum of 30 kilometres an hour. This does make the board move a little bit too slowly. There is the risk that you’d get bored of the game fairly quickly just because the game is far too slow. It does make the board easy to control, but sometimes makes for a rather pedestrian affair.

The game mechanics are also fairly simple. You can only steer the board and jump. There’s not much you can do in the way of tricks. This does make the game fairly simple, but it would be nice to have at least some advanced tricks. 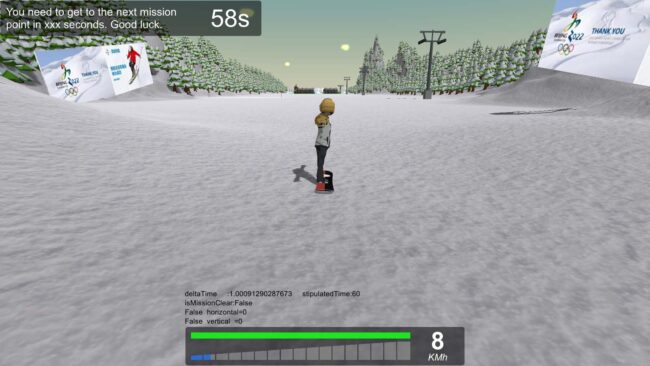 This game has obviously been targeted towards computers with very limited hardware given they’re aiming for computers with 1 gigabyte RAM. This would help explain why they’ve gone for such simple graphics. I would be more inclined to celebrate this if there was just a little bit more variety in some of the scenery.

If they were to solve these, it would go a long way to making this game a lot more visually appealing.

Having grown up in a time when games had to be simple, I do like the thought of games where you can just play without having to learn complicated game mechanics with elaborate storylines. Sometimes you just want to play something that is easy to learn and easy to play. This game certainly looks like it has the potential to be a game that could pass this goal.

It just needs a little more work to get there. Removing some of the distractions from the interface, making the game scenery a little more varied, having a board that actually moves at a reasonable pace and having a few more advanced tricks would help this game significantly.

It’s a game with potential, but is not quite there yet.