For better or worse, Fortnite introduced the world to the battle royale genre of games. It is one of the earliest examples of this genre, and is certainly one of the best-known. Some people have avoided the game though for various reasons, including the behaviour of some players in the Fortnite lobby.

Luckily it is not the only game in this genre. Here we are looking at Super Animal Royale. This went into early access in 2018, the final release being released in August 2021. This game brings a completely different look and feel to the genre and allows you to play as an animal rather than a human character.

While the game’s DLC does cost money, the base game is free to download and free to play. This means this game scores a spot as part of GeekJabber’s Free Week.

There are a few different game modes available in Super Animal Royale. This includes the standard battle royale, as well the ability to do duo and squad games. These are mainly just variations on a theme from what I can tell, to allow you to team up with your friends.

Whichever game mode you select, you are taken into a game lobby. This system is very similar to what a lot of other battle royale games used. It allows the game to automatically bring enough people together in an automated fashion before a round starts. Once enough people are in the game, a count-down timer starts to warn you of a game starting. Once this gets to zero, the game starts.

The game follows a very similar pattern to other battle royales. You’re flying over an island and you get to choose when you launch. Once you make it to the ground, you will then need to run around and find armour, weapons and other goodies which you can then use to take out other players. The game then becomes a game of last-man-standing – the last player wins the round.

Like other battle royales, the game offers other quirks to assist with gameplay. For instance, shortly after a game starts, Skunk Gas is released which will affect the health points of anyone not in the Circle of Life. This helps prevent the game becoming a game of chasings once you get down to a small number of remaining players by ensuring that they remain within close proximity of each other.

This game seems to follow a somewhat predictable path in the sense that it follows a formula already set up in previous battle royales. It is still quite a lot of fun. The violence and the graphics style is a lot more cartoony, and has a more top-down camera angle, which gives it a very different visual style. It’s basically a slightly less graphic and more cute battle royale. 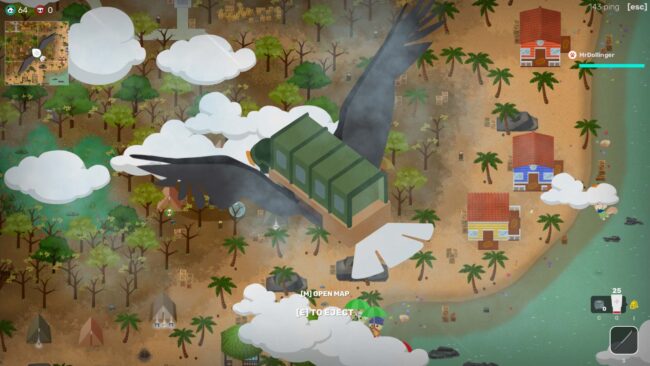 As mentioned above, the graphics are really more cartoony for a battle royale. This gives the game quite a lot of cutesy charm. The violence is somewhat less graphic than other games of this genre, though of course being a last-man-standing type game, there will always be an element of violence.

The fact that you play as an animal rather than a human puts a different twist on this as well, which adds to the cutesy art style.

The game also offers a different camera angle. While Fortnite would put the camera behind the player’s avatar, this offers a more top-down camera angle. In this case though, it actually works surprisingly well.

Super Animal Royale has a very unique art style for a game of this genre. In this case they’ve made the style work extremely well.

One of the big problems with the Battle Royale genre is that it is very much a me-too type of genre. Once Fortnite became popular, everyone wanted to release their own clone of the game to try and cash in on the game’s success.

I think there is an element of that in Super Animal Royale. It is very similar in concept and gameplay to Fortnite, and follows a very similar formula.

Having said that, this game does have a very unique art style that does set it apart from games such as Fortnite. At least there has been some work to make it their own. The reduction in the graphical violence may make it more appropriate for younger audiences. For those that have been turned off by the toxic nature of some Fortnite players, this may offer an alternative if you’re still interested in the battle royale genre

The game is still surprisingly fun. If you’re looking for a Battle Royale with a twist, this is definitely a new take on the genre started by Fortnite.