Gobby McGobbleNutz Presents: The Art of the Dad Joke Chapter 1

Why did the computer go to the doctor? It had a slipped disk. Anyone who knows me knows I’m a bit of a fan of a good cringey dad joke even though I’m not a father. Bad puns and awful limericks are more entertaining than we give them credit for. I’ve written material before in other context based on this style of humour,

So when this little gem came up as a new release, I thought this would be worth investigating. At such a low price, what could possibly go wrong?

The game is relatively straight forward. When you launch the game, you are introduced to Gobby. Gobby is lonely and doesn’t have any friends. He wants to make friends by telling really daggy dad jokes. You vote on whether you get a reaction out of the joke.

That’s pretty much the entire game right there. It’s not complicated at all. It is really about as simple as a game like this could get.

As part of testing, I have closed and relaunched the game to see if it would randomise the jokes a little. It appears it does not as much as I’d like, the jokes it started with were the same jokes that I saw the first time I ran through. This was slightly disappointing, mainly because when you relaunch the game you are unable to continue where you left off. This does limit replayability somewhat, in that if you want to play again you have to sit through the same jokes over and over. I would have loved to be able to continue between restarts of the game, just so that you can keep coming back for new content.

The other thing that concerns me a little is that the download for the game was around 600 megabytes. For such a simple game, I would not have expected this to be anywhere near this size. Given that there seems to be nothing more than just a very simple interface without anything too fancy, I do wonder what else is included. Looking at the folder structure on my hard drive, there’s over 200 megabytes worth of audio data and over 400 megabytes worth of video and image data so I suspect it’s a case of poor optimisation.

Having said that, aside from the issue of having to sit through the same jokes when you restart the game, it’s actually a good way to pass a little bit of time if you enjoy cringey humour. The only thing I’d like to have seen is the ability to pick up where you left off, so you can continue receiving new material to have a giggle at. If you’re looking for a way to expand your collection of dad jokes, you could do worse.

The graphics are absurdly simple. It’s basically a single play area, and it’s a basic point-and-click voting system to indicate whether you had any reaction to the joke.

It was this that had me initially concerned over the size of the original game. As noted above, this does seem to be a simple case of poor optimisation. It is probably nothing to worry about, other than it might cause an expectation that more content should have been included as the game.

It’s not at all complicated, nor does it need to be. This style of game really benefits from simplicity in both gameplay and interface and, aside from the optimisation issues, they’ve otherwise got that about right. 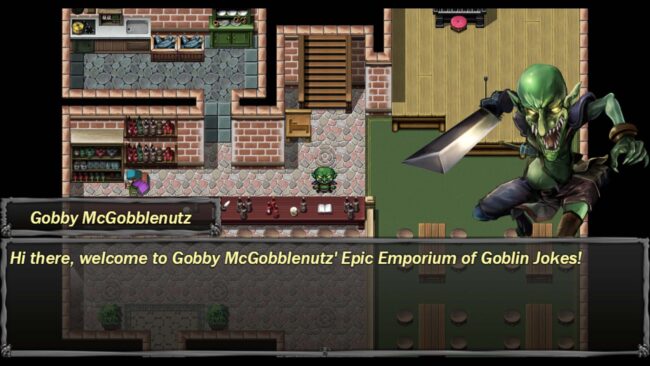 This game is a little bit of a mixed bag. On the downsides, it doesn’t seem to save any progress you make between launches. This is something that may hinder replayability somewhat, as at the beginning at least you’ll be sitting through the same jokes over and over. The graphics and audio seem to be not as optim9sed as they could have been.