Happy’s Humble Burger Barn came onto my radar a few months ago when I began seeing trailers for it come up in the normal places I go looking for them. Happy’s Bumble Burger Barn gave an impression of having a certain weirdness about it. I also began thinking about how a game that was all about flipping burgers would actually work, particularly after introducing a horror element.

I have since realised that the game has both a paid version and a free version on Steam. I have decided to give the free version a crack. From what I can tell from the description, the developers consider the paid version a “sequel” to the first, but the storyline seems to be largely the same between the two.

The storyline starts fairly simply. You are hired to work at Happy’s Humble Burger Barn. You are the sole employee and you are tasked with operating the store.

The gameplay is relatively simple. When you launch the game, you are on your way to work. You must drive towards the building, park your car, and open the store.

Once you have arrived, you are given instructions on what you need to do. These instructions could come in many forms, including clock on, serve customers, or perform other tasks. As the game progresses, the instructions get a little bit more involved.

The game will also try and spring a few surprises on you. By surprises I mean unexpected events that you have to go and deal with. These events add to the storyline and add a certain horror element to the game. As the game continues, these become more involved, and more horrific. The map starts to open up and introduce more elements of the story/

Once you get to a certain point, things get a little bit interesting. You realise that the paid game is not a sequel. The free version is just a demo and only allows you to play up to a certain point. You then get a piece of video footage that advertises the content in the rest of the game. This is basically a great concept, but poor execution.

The reason I say this is that the version I downloaded was the “free” version, with the full version being listed as a “sequel”. There was also a separate “demo” listed in Steam. What is clear is that the “free” version is also a demo which only gives you access to the early content in the game. There really shouldn’t have been a “free” version and a “demo” version listed, as I suspect the demo version would have very few changes from this. While I understand the need for marketing, doing it this way is likely to cause confusion.

Die what it’s worth, the part of the game I could play was otherwise very well done, with the exception of what I describe below. It’s just a shame that the execution of these demo versions was so poor. 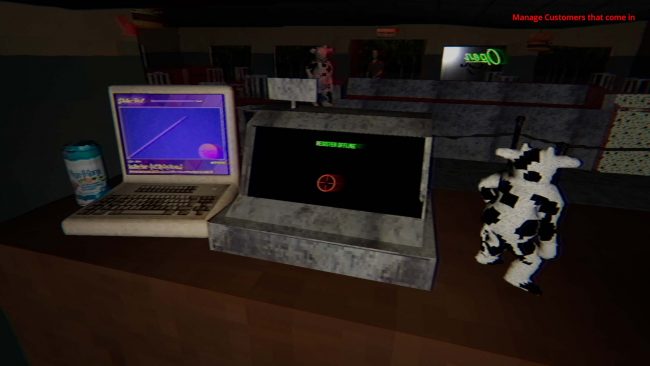 Graphics were the biggest disappointment with the game. Early on in the game, the graphics were very similar to some of the early attempts at 3D graphics on PC in the mid 1990’s. The graphics were a bit rough and there were also a few weird graphical glitches at times, for instance there appeared to be a bit of “flicker” on some of the terminal displays the developers had created on the counters.

It is good to try and optimise graphics to allow for a wider range of hardware, and I have applauded some games in the past who have been able to do this well. This is an example of how to go just a little bit too far.

As you got into further stages in the game, the graphics did improve quite substantially. Once the later horror pars of the storyline open up, the graphics are definitely a lot less rough. I have no idea why there is such a huge disparity in the graphics quality between the different sections of the game. It seems to serve no purpose and makes the beginning of the game look cheap and nasty.

This particular version of the game is a bit of a mixed bag. It’s fairly obvious that this is just a promo for the full gam. This was a little bit unexpected, given that the full game was marked as a “sequel” to this. I would have expected this to be marked as a demo in this case, however it seems there is a separate demo of the actual game. This is extremely confusing

For what it’s worth, it looks like it’s otherwise a decent game with a good storyline, that is simply let down by the mediocre graphics in the early sections of the game and the aforementioned confusion.