The revival in retro computing has really been a major scene in the computing world over the last five years or so. It seems everyone is jumping on the bandwagon, either via restoring old hardware, emulating it, or recreating the games.

Hellbound somewhat fits into the category of ‘recreation’. The game attempts to give a nod to the old Doom and Quake games that proved that the PC platform could handle first-person shooters, but rather than simply recreate those games, it attempts to make them your own. Given the subtle nod to those early games, I think it’s worth investigating how good the game actually is, just to see if it lives up to that hype.

Launching the game, and it is worth checking a few graphics options out. While I don’t have the latest and greatest gaming computer, it is well above even the recommended requirements. The default settings for Hellbound did seem a little on the conservative side in that regard.

You do have the options of selecting between two different game modes: either starting with a campaign, or going into a survival game. You won’t be able to select Survival until you’ve completed some of the campaigns, so this won’t be available to you immediately. This does seem to encourage a form of progression.

Going into the campaign mode, and the game is absolutely amazing. It is essentially a modern version of the Doom and Quake series of games, except rather than be a straight clone of these games, they’ve taken those concepts and made them their own. The level design is absolutely amazing and the controls are already familiar to you.

The attention to detail in creating this is absolutely amazing. They’ve taken all the best bits of these older games, and made the concept their own. If you’re looking for games that are more than just a remake of a retro game on modern hardware, Hellbound is where you should be looking. They’ve asked the question “What would Doom look like if it were to be made today?” and answered it perfectly. This gave me the right amount of nostalgia, while reminding myself that it is a modern game.

Hellbound goes far further than being a simple remake, it is a reimagining of the Doom and Quake concept as a modern game. For those that have played the early versions of Doom or Quake, Hellbound is a really engaging game that seems to be taking that baton and running with it on modern hardware. I hope it gets enough attention to be able to be successful in its own right. 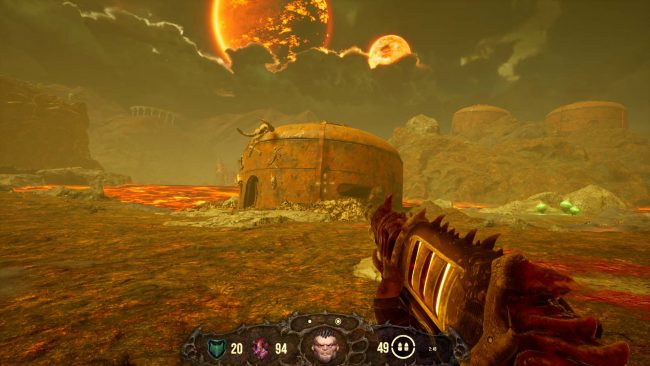 The graphics are actually pretty decent. Having spent time with both Doom and Quake myself, the nod to the earlier graphical style is pretty faithful and very tastefully done. Given the rather antique hardware the game is intended to run on, it’s actually impressive that they’ve been able to push the graphics as far as they have.

The only issue I really had was the contrast over the scene. Even when adjusting the gamma using the in-game settings, the enemies you were fighting did tend to blend into the background a bit more than I’d like, particularly at a distance. This did somewhat hold me back, as you would have something shooting at you, and you didn’t immediately register what it was because it was difficult to tell the monsters from the rock face behind it

Aside from this, the graphics were incredibly well done.

The only complaint I have about the game is the issue with the enemies you’re fighting blending a little too much into the background.

Aside from that, Hellbound is the perfect blend of old-school retro gaming and modern game. It is not just remaking a game for nostalgia;s sake. The developers have made the game their own, while keeping all the good things about the original Doom and Quake games.