Hello Neighbor 2 is somewhat of an interesting game. I’ve covered horror-style games before, but this doesn’t seem to fall neatly into that category even if it’s fairly simple in style. The game style is similar, but the storyline is somewhat different.

The developers describe the game as a stealth horror game about uncovering your creepy neighbor’s secrets. While the full game won’t be out until December, this sounds like the right level of nosey bastard for me to check out the demo.

It should be mentioned that the version reviewed here is only the Demo version. The full version is still being developed. The full game is likely to involve significantly more content than what is in the Demo, which is to be expected.

The game itself is a mix of horror and puzzle-solving. You will be playing an investigative journalist called Quentin. A number of children in the town have gone missing, and you suspect reclusive inventor Theodore Peterson to be involved.

Acting in your role as investigative journalist, you will need to sneak around his property and look for clues to solve the mystery. Don’t get caught by the homeowner, otherwise it’s game over.

Playing the game through, the puzzles seem to be at just the right level. They’re challenging without being frustratingly so. This will be great for those that enjoy the problem-solving elements of these games, but get easily frustrated when they become too cryptic. You will need to get a little bit creative and think outside the box for some of them, but then again, I do believe that’s the point. You can’t make the game too easy!

I did notice on occasion the game’s physics was a little weird. Not in a huge way, just occasionally when you drop an item, it bounces around a little unpredictably sometimes and it can take a moment to work out where it landed if you need to pick it up again.

The game is challenging, but in a good way. This is not a game you’ll want to passively play just to let off a bit of steam. You’ll need to have your brain active while developing a strategy to deal with what did and didn’t work for you.

The game is also extremely engaging. It has a way of holding your attention and keeping you wanting to continue solving puzzles. Once I got into the puzzle-solving, I definitely felt a sense of desire to keep on playing. This is likely to be a game that keeps you involved for long periods of time. Compared to some of the other horror games I’ve played in the past, the game is significantly more engaging. 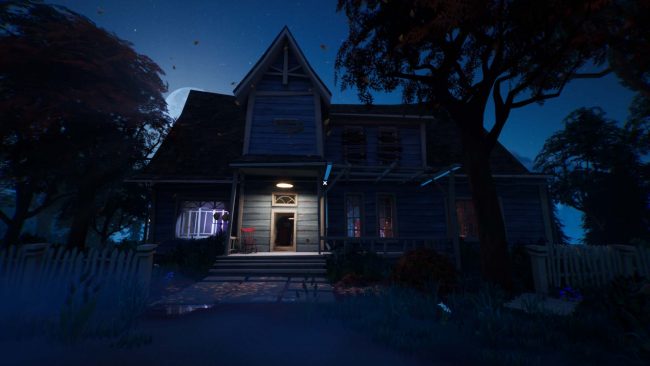 Graphics seem to be what makes or breaks games lile these. I’ve reviewed horror games here in the past that have a puzzle-solving style of gameplay that are similar in concept to Hello Neighbor 2. There have been a couple of times where a game that was otherwise done fairly well was let down by substandard graphics.

That doesn’t seem to be the case with Hello Neighbor 2. The graphics have been extremely well done, and the lighting gives the game a slightly spooky atmosphere without making the game look weird. The developers have gone to a lot of effort to create an art style and quality of visuals that just works, and it shows.

Developers of particularly horror-themed puzzle games would do well to get a copy of Hello Neighbor 2 as an example of how to do these visuals well.

As puzzle-solving games go, this is one of the better examples I’ve reviewed for GeekJabber. Hello Neighbor 2 is extremely engaging, challenging without being infuriating, and has a way of just captivating you into wanting more.

There were a few minor physics quirks, but they were more quirky oddities rather than anything showstopping. The graphics were also exactly what a game of this genre needs.

I’m looking forward to seeing what the full game has to offer. If the quality of the demo is anything to go by, good things are coming.