I’ve previously reviewed Crash Drive 3 for GeekJabber and have been impressed with it. I wanted to add a racing game of a slightly different style onto the site as it’s a genre I am considering exploring further.

I came across Highway Traffic Racer when searching for recently released games on Steam. It’s a low-cost game coming in at a measly $A1.50. It is a fairly simple concept, has fairly low system requirements, and so I think worth testing to see if it is worth obtaining.

The game is about as simple as you can get for a car racing game. When you launch the game, you are able to set up your starter car. When you’re on the road, the goal is to drive for as long as you can without crashing. The further you get, the more money you earn

The controls for this game are also about as simple as you can get. You’ve got controls for steering, a horn, acceleration 6and that’s about it.

The combination of all of this makes the game very easy to get the hang of. I had the hang of the game from the moment I started driving. It was not very long before I was able to get the car going a considerable distance without crashing. It’s a fairly easy game.

Once you have built up a bit of an income, you can invest that back into your car to make improvements. You can also unlock various different tracks as you build up your skills for a bit of added variety.

In terms of game play, I can make a fairly interesting comparison. For those that were around in the 1980s might remember the game Test Drive, which was available for just about every platform you can name. Highway Traffic Racer is a very similar concept, except with no risk of getting a traffic fine as there are no police in the game.

This is I think something that is somewhat missing from the game. You get a bit of variety in the gameplay through upgrades and new tracks, yet the games can sometimes feel a bit like the same thing over and over for a while. Having something equivalent to avoiding the traffic fines that you had from the older Test Drive games, that would have added an additional element to help break up the feeling that you’re basically playing the same thing over and over.

That’s the big shortcoming of this game. Without that element, it’s very easy to get a bit bored with the game which might limit replayability. This seems a shame because with just a little bit more variety is really all this game is missing. It’s certainly what made the old Test Drive games more challenging. 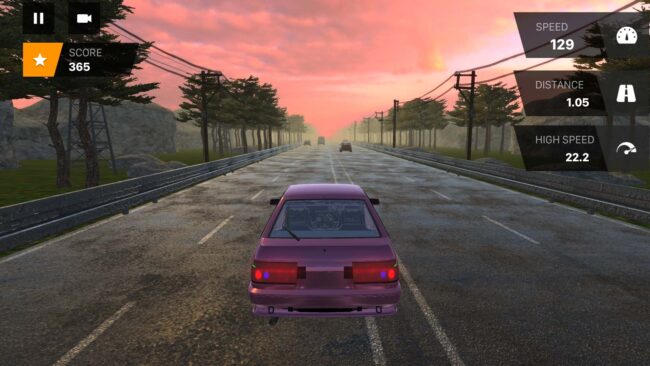 The first thing you’ll notice is that the system requirements for this game are really very low. This has the advantage of widening the number of machines this can be played on, though the downside is that the quality of the graphics tends to be a little more basic.

The graphics in this game definitely feel a little antiquated. They remind me of the level of graphics detail you’d get in some of the early PlayStation games such as Gran Tourismo. Given the game is obviously targeted towards lower end hardware, this is still moderately impressive. Those that are looking for a high level of detail are likely to be a little disappointed, but those that are a little less picky will still find them adequate. It’s a case of managing your expectations given the low cost of the game and the goal of having the game run on a wide range of hardware.

The only thing to bear in mind is that the game is initially set to have a framerate cap of 30 FPS. If you’re running the game on a machine that sits above the minimum system requirements, you may wish to jump into the settings and take advantage of the 60 FPS framerate cap to get a smoother gaming experience.

I am slightly conflicted about the graphics quality. On the one hand, I applaud the developers for providing an option for those that don’t have the option of spending thousands of dollars on a gaming rig. It is definitely impressive for a game that’s targeting at very basic hardware. I just suspect that some may have liked some more high-detail options.

As a basic driving game, the game works well enough. It definitely has some parallels with the old Test Drive games from the 1980s. If that’s what you’re going for, the game does a reasonable job.

Where this game falls down is the variety in the gameplay, and perhaps a few higher-detail graphical options. I’ve marked it down based on that – it’s basically a reasonable game, but without the variety there’s a risk you may become bored quickly.