I’ve recently made reference to wanting to explore more racing games as part of a review on Re-Volt. It appears the gaming gods have shone down on me somewhat, as Hot Lap League appeared on my list of new games to check out on Steam

While the game has existed on other platforms previously, it seems to be a relatively recent addition to Steam. It also seems to be a slight variation on other games I’ve played in this genre. I’ve given it a bit of a test drive (pun intended). Let’s see if this game translates well to PC.

Hot Lap League is a little different from other games I’ve played in this genre. Where you’d normally expect to be racing against other cars, whether they’re other people or controlled by the game, with Hot Lap League you’re essentially competing against yourself.

The basic premise is fairly straightforward. You start with a beginner track, and have to do a hot lap to set a time. You can then go back and redo the track to try and improve your time. Once you’ve started mastering one track, you then unlock other more challenging tracks. You can also build yourself up to different cars as well, which adds a bit of variety to your driving.

Hot Lap League also has the ability to compete in daily events, where you get to play on more challenging maps to get additional rewards. This of course is to keep you coming back to the game.

I do appreciate this particular approach. As my mother once told me, a good game is a quick game. With Hot Lap League, each individual race is only relatively short as you’re only doing a single lap each time. This means you can change how you play the game depending on whether you only have a quick break to play, or you can choose to challenge yourself by doing multiple runs and going for the long haul over different tracks. It essentially allows the game to adapt somewhat to the amount of time you have available, or perhaps the distractions of other commitments.

When playing the game, I did also notice that the cars were extremely easy to control. I’ve noticed with some games the controls are either a little too sensitive or not sensitive enough for my liking, and it takes me a hot minute to get used to how sensitive they are. I’ve found that controlling the car in a straight line or cornering is very much spot on, so there really was no flailing around the first few laps while I got used to the handling.

Once you start playing, it’s very easy to become competitive against yourself. While testing, I noticed that I was starting to challenge myself to try and improve my times. It was very easy to get lost in the moment and just push yourself that little bit further. 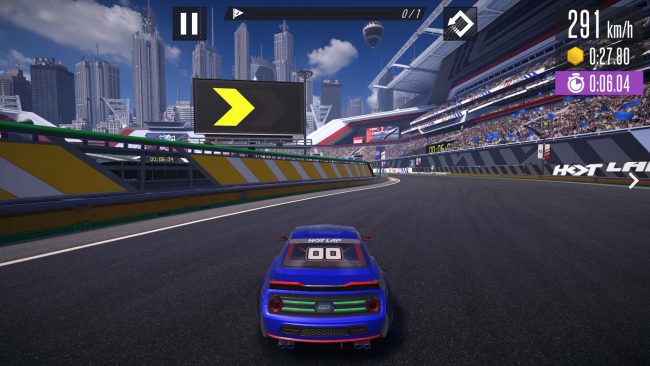 ‘The graphics are exceptionally well done. I’ve said this on earlier reviews and I’ll say it again here. They are not super detailed, but for games like this it doesn’t need to be. While some previous games I’ve played have overcooked the simplification, games like this don’t really need to be highly detailed as you’re not necessarily focussing on the beautiful scenery.

Hot Lap League seems to strike a very good balance in this regard. Given the lower specced equipment they’re targeting, it’s impressive what they have been able to achieve.

Hot Lap League translates exceptionally well to PC. The game doesn’t have the issues with controls that some other games have, which makes the game significantly easier to get the hang of. The game is easily adaptable to whatever time you have as well.

It is a great game if you just want to let off steam for a couple minutes, though it does adapt well to longer gaming sessions if you want to challenge yourself.

The game is also just downright fun. Which is really what gaming is all about.