With Halloween quickly approaching us, it would be nice to review at least one Halloween-themed game. After all, I should at least make a token effort to keep GeekJabber relevant to whatever events are going on in the world around us.

Howloween Hero is a Halloween themed adventure game with a bit of a twist to it. It caught my eye as a newly released adventure game that seemed to be quite polished. Time to dive in and see if this game is any good.

The game has quite a lot of novelty value to it. You play as a mischievous puppy whose owner is not allowed to go out trick-and-treating. You will need to sneak out and go out around town on their behalf to try and collect as much candy as you can.

As you go around town, you will meet a colourful array of characters. Many of them will give you candy, of course. There are others that will give you an array of side quests, such as rescuing a kid from a tree or getting past the next-door neighbours by using a disguise.

Without giving too much of the game away, it is a whole lot of fun. The writing in it is extremely good. It is also extremely child-friendly, so it looks to be an excellent game to play with younger kids. For those seeking a more educational experience, there is an element of problem-solving in there which will help develop these skills.

There are also plenty of opportunities to customise your character as you go along as well, giving your adorable pup some suitably themed outfits to celebrate Halloween. This will help bring out your creative side as the game goes on.

Even as an adult, the game is extremely engaging. As mentioned before, the writing is extremely on-point. There is a good level of tie-in between the different characters. These characters don’t necessarily exist in isolation, you can certainly tell certain characters have interacted with each other in the past as part of their backstories. This is not some quickly put together piece to cash in on Halloween, they’ve gone to a lot of effort to make this game work. 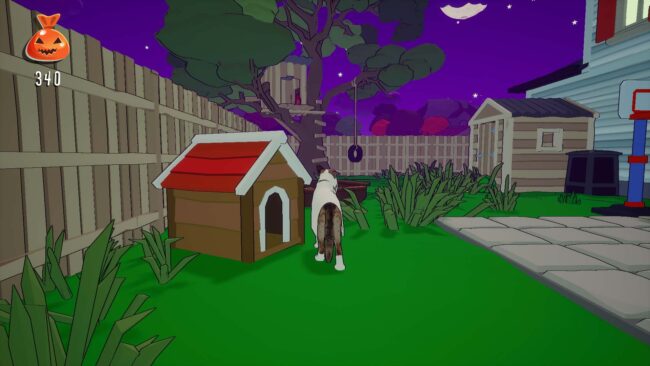 The graphics in this game are really very impressive. It’s very cartoony, but in a very good way.

It’s scaled back somewhat, it’s not highly detailed. Having said that, in this case it works very well. You can think of it like an interactive cartoon in terms of graphical quality. This is an example of how this graphical style can be done very well. This is a pleasant change from games that scale it back in a way that is awful, which seems to be a theme amongst some of the other indie games I’ve played in the past.

For those that are developing games that want a simplified cartoony feel, this would be an example of how to do things properly. Developers of other games could learn a lot from Howloween Hero.

If you’re looking for a Halloween-themed game to play with the kids, this is an excellent option. Even if you want to play by yourself, it’s a great game. This has been done extremely well and is a very enjoyable game.

The only downside to the game is it’s something that might only be relevant at certain times of the year. This may limit replayability, but is otherwise an example of how to do this style of game properly.