I Am Future Review

I Am Future came onto my radar a few days ago when I started seeing trailers through my usual sources. It appeared to be an interesting game, combining a few different concepts, including survival, crafting, puzzle solving and exploration.

I was lucky enough to be able to get a pre-release copy of the demo and have spent some time coming to grips with the game.

The game is set in Cosmopolis. You have woken up alone on a skyscraper to find the place flooded. You will need to use what you have left to craft a home for yourself. Once you have everything you need, you can then go and explore what is left, and perhaps gain an understanding of the demise of civilisation.

Launching the game and it wasn’t particularly difficult to set up. I did note that the graphics quality settings defaulted to something fairly conservative. The only other change I made was to disable the music track, which is a personal preference.

The game proper takes you through a basic tutorial, which was very tastefully done and gets out of your way once you have the basics down. The tutorial was done quite well. It gives you a basic understanding of the controls and then just gets out of your way. It’s not overdone and doesn’t make you jump through hoops, it gives you what you need to know and then lets you just get on with it.

From here, you are given a series of challenges which help you try to get through the game. These are given to you as a series of tasks. These are an excellent way to guide you through what you need to do to progress. Of course, once you become more familiar with the game, you can ignore those at your leisure. Doing these tasks though will involve a bit of exploration and a bit of problem solving. This was actually done quite well. It’s a good way to guide yourself through the storyline, but stays out of your way if you’re a more experienced player

Once I got started, I was finding the game actually quite fun. The game is a little challenging, but in a good way. It’s not a game you can just play mindlessly, but this is actually a good thing. You’ll have to actually think about the problems that you’re solving. That’s somewhat of the point of the game. Once I was in the game, this problem solving became extremely engaging. It’s a cliché I’ve used before, but once I was playing, I found it difficult to actually close the game.

While I was only able to play the demo, I could see this game becoming fairly popular. It’s well put together, is extremely engaging, and is a nice mashup of problem-solving, exploration and crafting. The interface was fairly easy to navigate. The game was challenging and engaging, and just felt very professionally put together. 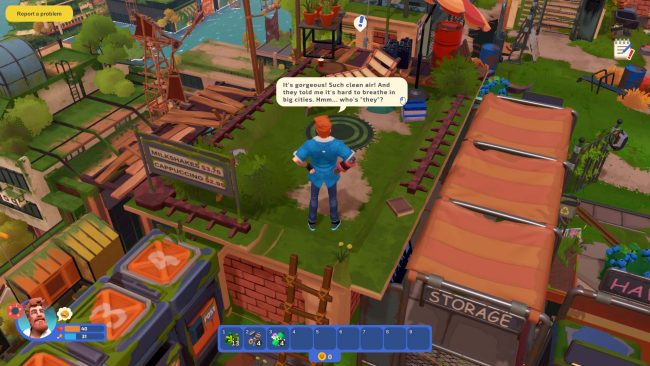 The graphics for this game are nothing short of amazing. They do have a somewhat cartoony feel to them, but the art style absolutely suits this style of game.

The interface did take me a moment to get used to, but was very intuitive once I got used to it. This was very much helped by the tutorial prompts that were tastefully done and not too overpowering. I’ve criticised other games before for overdoing the simplification or for having graphics that were downright bad. There’s none of that here. The graphics were absolutely spot on, and I liked the art style the game employs.

I like this game. The gameplay is extremely engaging and is a well-written combination of problem-solving, exploration and crafting. The graphics are also excellent and the art style is a very good fit.

I can see this game going places, both as something to play on your own and also within the streaming community. Let’s hope it can live up to that hype when released.