I have been a user of Second Life for a while now, still popping in every now and again despite the fact that its peak usage seems to have been and gone. Given the nature of the virtual world that is Second Life, it’s very difficult to avoid the whole furry subcommunity. The furry fandom seemed to adopt the creativity fairly heavily and you can see them almost everywhere.

I wouldn’t necessarily call myself a full member of the furry fandom. I definitely don’t adopt some of the weirder parts of it. I do appreciate some of the more creative, artistic parts of it. Given some of the people that are in our Discord group come from a similar background, I thought it might be worth visiting My Furry Detective to try and see if this artistic creativity could make its way into a game.

The storyline is interesting to say the least. You play the part of a detective who has been interned to a quiet police station, where you are supposed to be investigating crimes. You’re teamed up with a partner who has a lot of motivation but very little skill.

The problem is this description somewhat overrepresents what the game actually is. After spending about 20 minutes in the game, you realise it’s not so much a game as it is a story. There is very little interaction. Most of the game is reading dialog. You don’t really pick this up from the description. This is somewhat of a disappointment as it may confuse some people who were expecting a bit more interaction.

Admittedly there are options to skip certain parts of the dialog, such as “unseen text” – whatever that means. This essentially mean that the story should move a little faster. But it basically means this should be more considered a slightly interactive novel rather than a full game.

As a basic novel it does reasonably well. It’s reasonably well written. It’s just a bit slow for those such as myself who aren’t big on reading. For those that are into fiction, I suspect this might work a lot better. It just seems the game description should have been a clearer that it was more a slightly animated story rather than a full game. 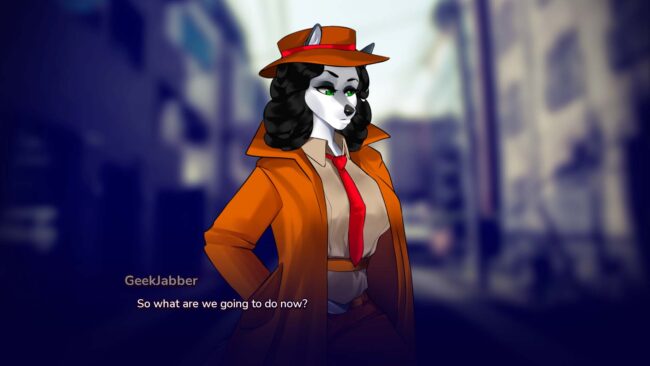 In terms of graphics quality, it is really quite well done. There’s not a lot of interactivity, which is expected given the game is more novel than game. However, it has a really nicely done art style.

There is quite a lot of attention to detail, although it would be nice for it to be slightly more animated. This might add a little bit of variety, given they’re mostly static images. I did enjoy the creativity in the art style, so if that’s what you’re looking for you’ll find it here.

If you’re looking for a game that is an actual game, this probably won’t do the trick. This game would be better described as a slightly interactive novel.

For those that want to appreciate a bit of creative writing with some matching artwork, this would definitely be up your street. If you’re wanting to play this as an actual game, this would be a rather slow experience.