Not For Broadcast Review

One thing I have noted of late is that some particular genres seem to follow on tried formulas for their games. For instance Fortnite seems to have pioneered the Battle Royale genre, and a lot of other Battle Royales seem to be doing their own version following a very similar game style. This creates a genre of games that are all fairly similar.

Not For Broadcast came across my radar recently. It caught my attention because it seemed to be attempting something a little different. It seems to have lofty goals of being a parody of your typical newsroom I’ve been given an opportunity to give it a playthrough, so let’s see if it lives up to the hype. This is a break from the traditional Battle Royale or First-Person Shooter.

The premise of the game is fairly simple. You are in charge of broadcasting tonight’s news broadcast. You will need to make a lot of decisions on the fly, bleeping out all the naughty language, making sure the cameras are where they need to be, and making sure what you send out is engaging for your audience. The decisions you make influences how your audience will respond.

It should be noted that this is one of the larger games I’ve downloaded of late, with a download of over 40 gigabytes. This definitely isn’t the largest game in my collection, though it is up there. The reason for this is the sheer quantity of video footage that is included in the game. The developers claim there is nearly 43 hours of pre-recorded footage included in the game which has earned the game a place in Guinness World Records. The size of the game may be an issue for those still on slower Internet connections or those that still have to worry about bandwidth caps.

When you start a new game, you are given a few different options for game modes. This mainly sets the difficulty level for the game, which you can of course set to taste.

The first playthrough takes you into a tutorial. This gives you a basic overview of the game mechanics and, I will say, this is one of the best tutorials I think I’ve seen in a while. It’s not just a simple overview of what button does what, it takes you through a complete broadcast and gives you full instructions on what you need to do. This does get a little fast-paced in places, so you will need to be on your toes. It also serves as the starting point for the storyline, so the tutorial is integrated in the game proper rather than as a separate thing.

Once the tutorial completes, the game continues with a simple point-and-click style adventure, which sets up the storyline ready for the next broadcast. This has been done actually fairly well. I’ve seen other games try and draw this out.  Not For Broadcast tries to keep these point-and-click sections compact enough to set things up without becoming boring.

The game itself continues to be extremely fast paced. You do need to keep track of a number of things at the same time, which just adds to the fun. It’s a challenge, but also extremely engaging. It’s hectic, but does not get to the point of being overwhelming. It’s got the balance right between keeping you busy but not giving you too much to deal with.

There is also another fantastic addition. At the end of each broadcast, you get an opportunity to review what you broadcast, as well as what made the cutting room floor so to speak. It is actually good to sit back and watch some of this, as the quality of the writing sometimes gets missed in the heat of the moment. The writing and acting is, to put it simply, phenomenal. It appeals to my schoolboy sense of humor but in a way that doesn’t go overboard. There’s a line between vulgar and downright obscene, and the writing seems to straddle that boundary very well. The writing is also a very well-written narrative about the power of media in our lives, which is subtle enough not to bludgeon you to death, but is also extremely relevant. 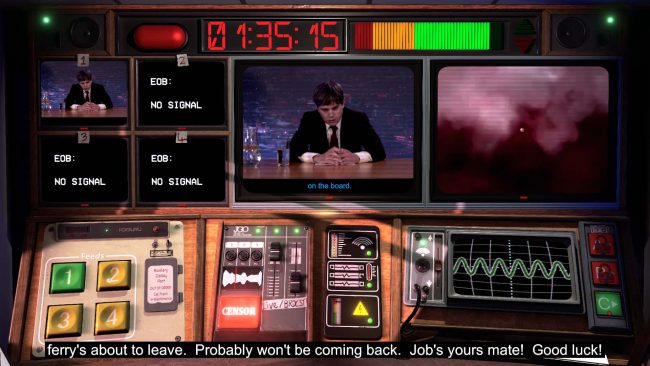 The graphics in this game are extremely well done. As noted earlier, there is a large amount of pre-recorded cut-scene footage that allows you to create narratives each time you play the game. This footage is extremely well put together.

The interface is also absolutely brilliant. It’s clear and straightforward without being too cluttered. It has a decent level of detail, without going utterly overboard and distracting you from the gameplay. This is a classic example of how things should be done. A lot of attention has been given to getting this right.

A lot of effort has been put into creating this game, and it shows. It’s got great writing, a point-and-click narration style in places that gets the job done without being boring and drawn out, and is extremely engaging and funny. If you wanted a game to compare it to, think The Stanley Parable. This game is essentially a funny, slightly vulgar and poignant parody on mass media in the same way that The Stanley Parable is a comedic parody of computer gaming.

This game is one of the funnies games I’ve played in a very long time. It’s an area that not many games delve into, and has been executed perfectly.