I have been on the lookout for a few more horror games to have a look at. Office Elevator came up on my Steam new list and I did buy it shortly after release, and have only now had the time to properly review it.

As a genre, this style works very well if you’re a streamer, as you get to take your audience along for the ride. For this to work well, you need to have a solid game to work with. Lets see if Office Elevator is up to the task.

The gameplay is fairly straightforward. You start by finding out there’s a package down in the basement for you to collect. On the way down, you are able to interact with multiple NPC’s that are able to fill you in on various bits of the storyline that help give you context.

When you return from the basement, you realise there’s a power outage. You must then solve a series of puzzles and a few games of hide-and-seek with various items to try and get navigate your way through the rest of the game without being spotted and eaten by one of the monsters that are walking around.

This part of it is done really quite well. It’s not particularly complicated, which means you don’t get caught up in every little bit of detail when you’re trying to play. The game is designed to get a reaction out of you with jump scares while testing your ability to find objects and solve puzzles. The game has got this part of it fairly right.

The storyline isn’t particularly detailed, but then in this case you probably don’t want to be caught up in the storyline. By speaking to the NPC’s, you get enough detail to get through the game. You want a game like this to be about problem solving and getting a reaction, which this game does well.

The puzzles and challenges are difficult without being impossible. You will be required to concentrate to solve them, while trying to avoid the jump scares from all the monsters on the map. Office Elevator seems to have got the balance of these elements about right.

The only detraction I’ve been able to find is the graphics. 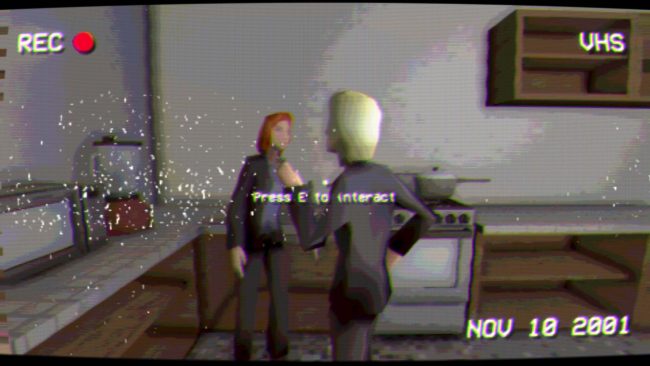 The graphics in this game are interesting to say the least. They are horribly simplified, to the point that they do look a little crude. This does seem to detract from the game slightly as the graphics are a little too simplified.

What is even more weird is that the developers have apparently chosen to go for a VHS aesthetic. Given you are not playing this came from the perspective of any sort of video camera, there seems to be no explanation as to why they’ve done this. You are playing as a human character, and you don’t see VHS effects in the real world. It seems that it’s an effect done for the sole reason that they can, not because it serves any purpose in the game or even adds anything useful.

While I get that the developers were trying to go for a low-poly aesthetic, I think in this case it’s gone a little too far. Adding the VHS effect without any need for it just seems tacky.

In some respects, they’ve got the balance right. The storyline, problem solving and jump scares seem to hit the right note which should have made this a fun challenge.

It’s just let down by the poor graphics, and some VHS-like effects that simply don’t make sense. If they had done this better, this would have been a great game, but as it is seems to be a bit of a distraction.