PC Building Simulator came onto the scene a few years ago. It’s a game I was somewhat aware of but didn’t really get around to checking it out.

The game recently come up as part of a deal on Humble Bundle, I thought it high time I actually gave it a bit of a run. Even being an older game, it’s worth having a look given the nature of the GeekJabber site. So let’s see how the game fares.

The game is fairly straightforward. You’re taking on the role of managing a computer store. You will be assigned various jobs via email, and you will be required to handle the jobs that come in as well as making sure stock comes in and maintain the store’s finances.

There is an element of progression in the game. The jobs that come in start at a fairly simple level. As you complete jobs, the workload increases, as does the complexity of the jobs that comes in.

Starting out, the interface does feel a little bit clunky. It’s not the worst I’ve seen, however it did take me a while to get my head around. It took me a couple of goes to get the hang of moving the machines around, as well as connecting and disconnecting parts and cables.

Once I got my head around it, the game was actually really fun. It was extremely engaging and I was finding myself really getting into the game.

I do appreciate that, even with the game being a few years old, the game is being updated with new content. On first launch of the game, I was given a notification that information about NVidia’s 3000 series graphics cards was now included. For some of us, owning one of these cards seems an insurmountable task given current chip shortages and price gouging. At least those that can’t get a hold of current generation cards get to play pretend.

The game obviously provides a simplified experience. If you are looking at this game to provide the knowledge required to fix and upgrade computers, this won’t provide it. You’ll still need to do that the hard way. As an entertaining way to provide a general overview of how this works, this is a great way of doing it. 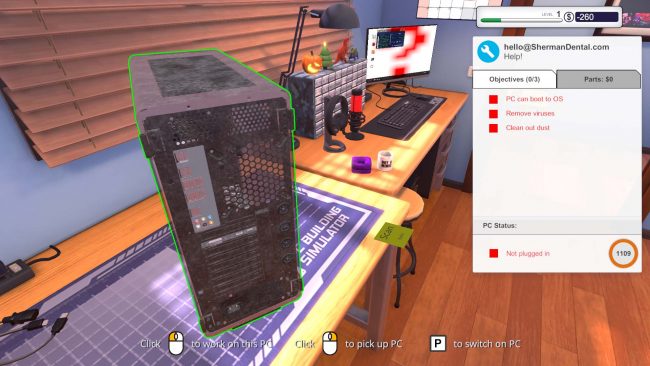 The graphics for this game are really quite good for a game of this type. It’s simple and cartoony, but done really tastefully.

The developers have really put a lot of effort into getting the balance right. It is of course simplified and cartoony, but the level of detail is about right. They’ve done a lot of work getting this looking good for those running lower-end hardware.

Once you get the hang of the controls, the layout of the interface makes the game fairly intuiyive. They”ve obviously gone to great lengths to make this aspect as simple as possible.

Even with PC Building Simulator being a few years old now, it is still a fantastic game It’s great that it’s still being updated.

This might give you a simplified version of the PC building and repair industry. You are definitely not going to learn every piece of information you need to know, but that’s not the point. The game is a bit of fun and you can at least get the head around the basics.

It provides an entertaining way to learn the basics of PC maintenance and repair and it does that well.