Since going back and reviewing Carmageddon for Retro Week, I’ve been wanting to find some good racing games to cover more in the genre. It’s a genre I’ve enjoyed, but I’ve never really got around to testing that many racing games. I’ve covered some lower-cost racing games and there are certain gems that you can get on a budget, but there are a few absolute clunkers in there.

I think it’s time to investigate a few more in the more premium brackets rather than just going for the budget games. I have been given an opportunity to have a look at Pinchcliffe Grand Prix, which also goes by the name Flåklypa Grand Prix. While this game has been released on Nintendo DS many years ago, a remake new version has been released for PC and Steam. The appeal of the game is it is based on a film with the same name with it sharing many of the same characters. I’ve got the PC version here to have some fun with, so let’s give it a go

Launching the game for the first time, there is a brief initial setup. You’ll need to select a language, choose a character and give yourself a name. This is not a laborious process at all, and there does seem to be a decent variety in the characters you can select.

One thing I did note is that the graphics defaulted to 1280×720 in windowed mode. I’ve come across a few games that default to weird screen resolutions and insist on playing in a window, Rockerfeller being amongst them. The resolution, while low, is at least somewhat more modern and is easy enough to switch to 1920×1080 and full screen. This may just throw some less technical users who may not know that you can go into the graphics settings and change resolutions.

Once you’re past this though, you’re able to select a game mode. There are a few different options to choose from and they all form critical parts of the game to help you unlock content.

The first is Story Mode, which is a very nicely done interactive story introducing you to many of the characters referenced in the other modes. You do get to interact with the characters and navigate through the story in what is a basic point-and-click adventure style game.

You will need to complete the story as this will be how you’ll obtain the car parts you’ll need lto unlock the additional content. This is done by either finding the car parts as you click through the story, or unlocking a mini-game that when solved will give you another car part. You’ll need to go through fairly thoroughly to make sure you get all the car parts though as there’s a decent chunk of them.

Once story mode is complete, you then move onto racing, This mode was extremely well put together. On the practice track, you’re running through an obstacle course. Depending on which track you’re on, you have one of two objectives – to either get to the finish line as fast as possible, or to achieve a minimum number of points and then cross the finish line before time runs out. You also get to pick up more car parts along the way. Once you’ve got the practice runs down, you should hopefully have the minimum number of car parts required to unlock the next tracks.

This area is where I ran into a little bit of a hitch. Because I hadn’t picked up all the car parts I’d required, I was wondering why I wasn’t unlocking the next tracks. It took me a while to realise I had to go back to story mode and work out what I’d missed.

Once I worked that out, it did start unlocking some decent content and is when the game became far closer to a traditional driving game. You start unlocking more tracks, more vehicles, and more mini-games. The critical part is to get more car parts because, once you have all of them, you’re then able to build yourself the Il Tempo Gigante. Where this differs from other racing games is the race doesn’t end once you hit a certain number of tracks. You have a loop with a set number of stages, and as long as you reach each stage before you run out of time, the clock resets and the game continues.

It does take a bit of perseverance to start unlocking the content. Once you get there though, its it very much worth it. Once you get the additional tracks, its’ really quite addictive and very nicely done. This is certainly one of the better racing games I’ve played and it really sets itself apart by focusing on progressing and improving skills rather than just racing. 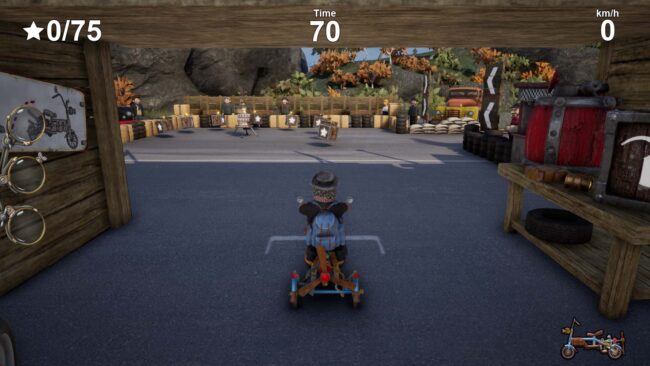 The graphics here are very well done. You can tell whoever put the game together is a massive steampunk nerd, as this does seem to be a recurring theme in the artwork.

One thing I did notice was that there did seem to be a level of compromise. The game has been written to work well with the Nintendo Switch as well as PC. They’ve obviously tempered down the details a little bit, for instance where there are crowds, they tend to look a bit static. This works well for the smaller screen on a Nintendo Switch, but I would have liked to see a bit more animation on the PC version.

Aside from this, the graphics are otherwise extremely well done. I do like the heavy steampunk influence, and it does seem to have a tastefully done cartoony feel. Given the game is targeting PC gamers as well as the Nintendo Switch running less capable hardware, it seems to be a sensible compromise.

The game itself did have a few small irritations. It’s basically a game that is based very heavily on “unlocking” content as a way of advancing and leveling up. I don’t necessarily object to this. It’s more that you have to figure out that you have to complete both the story mode and the practice laps to start unlocking the good content. Given that the story mode is a point-and-click adventure, some may find it a little slow and move on fairly quickly, without realising you actually need to complete it.

A bit more refinement for the PC version’s graphics may be needed to satisfy some PC gamers, though this is a very trivial point. The static nature of the crowds was noticeable enough for me to comment, but is not a deal breaker.

Otherwise, this is a fun little game. While putting this together, I was learning that it was actually a remake of an earlier game which was out on Nintendo DS. Given I’ve never really been much into consoles or handhelds, the original escaped my attention so I can’t really compare the two. This version is very impressive and a lot of fun to play. I can see myself getting hooked on this if I let myself.