Within the group of Twitch streamers I watch, there seems to be more interest in Horror games designed to give the player jump-scares. This had me interested in looking at some of the games bto see what this genre has to offer.

I was checking out some of the new and upcoming games on Steam when I came across this little gem. At a cheap $A1.50, it seemed a cheap enough game to try out. This game definitely had some unexpected results. 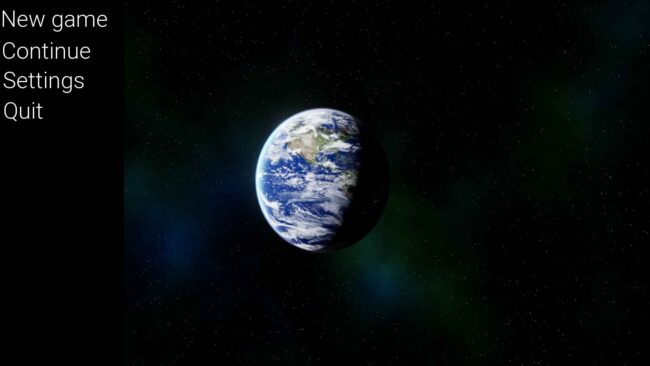 When you first launch the game, you’re taken to a very basic looking menu. You have the ability to select Low / Medium / High graphics and to launch the game. I’ve criticised some mobile games in the past for having slightly cluttered looking menu systems, this almost takes it to the other extreme. There is no explanation as to what Low, Medium or High settings actually gives you, nor is there any visible confirmation of which one you’ve selected. This made things very confusing.

Launching into the game and things get even more interesting. You are taken to a cut scene that explains the basic concept of the game. You see an alien slacking off at work by watching videos on AlienTube. The alien stumbles across a video describing humans and life on planet earth, and are given the coordinates of planet earth.

The alien then goes to his president, who instructs him to go and collect the human and bring them back. They go down, beam up the human, bring them back and lock them in a room. The game proper then starts when the human works out the code to get out of the room, is given a gun, and is given the task of shooting the aliens.

This is all well and good, but there is one thing that I’ve deliberately overlooked until now. If you wanted me to describe the quality of the opening cut scene, the only two words I would use are “total cringe”. The voice acting just sounds awkward, forced and unnatural. I did wonder what I was actually watching a few times.

To add to it, the graphical quality behind the characters in the cut scene is not a lot better. The way the characters walk can best be described as stif and the facial expressions the characters use is awkward. I normally try and include a separate section on graphics, but I don’t think I really need to say much more.

To make things more interesting, I hit a bug when I entered the game proper. When you exit the main door with your gun, you basically get hit by a whole heap of aliens all at once. The moment one gives you eye contact, the game is over. This of course happens very quickly given there’s about a dozen of them. Apparently this is a known bug, which you can work around by hitting the ‘E’ key during the cut scene.

I have tried this and it does seem to take you into the game proper. This is where you start solving the puzzles, remembering that all it takes is for an alien to make eye contact for the game to be over.

Things did look a little better at this point, but I only found about this because I was looking at some of the other reviews for the game. I was getting somewhat frustrated at this point, as I’d already invested half an hour of watching cringe-worthy cut scenes and trying to work around glaring bugs to really get much in the way of enjoyment out of it.

To be fair, I did see some potential at this point, and things started looking a bit more enjoyable. It was just a shame that it took so much effort to get here.

To be charitable, once I found out how to get around the initial bug, I could see the potential in the game. It looks like if I were to persevere enough I could have a bit of fun with it. I hope the developer can at least offer an update to fix the glaring bugs instead of having to discover workarounds hidden in replies to Steam reviews because once you work around that, the game looks like it has potential.

The problem I have is that it just comes across as a somewhat buggy and not-quite-polished high school project. The cringe levels in the opening cut scene and the fact that I had to go hunting for workarounds did kill the vibe for me.

They’re not necessarily problems that can’t be fixed. The developer would need to at a minimum invest in better voice acting for the scenes that require it, as well as better beta testing before release to catch the more glaring bugs. Had this happened for this release, I think the game would have fared far better. But as it is, the combination of the bugs and the poor cut scene just killed any enjoyment I would have otherwise got out of the game.