I’ve been meaning to have a look at more racing games. It’s a genre that’s almost as old as gaming myself, and I have been wanting to find a few more decent ones. I’ve had a bit of fun with racing games in the past, and it’s always good to add to the collection.

Re-Volt sprung up on my list of new games on Steam. It is a slightly different take on the game, as rather than be a straight car racing game, it’s more based around remote-controlled cars. I thought it a worthy addition to my collection, and thought it worth reviewing for the GeekJabber site.

Re-Volt is fairly straightforward. Launching the game, and you get the obligatory menu. I will say first up that you really should check the Options. The graphics settings default to something fairly low-resolution, not even close to what my equipment is capable of handling, so it’s worth making sure your graphics options match what your PC is capable of.

You can then go and start a game, where you will be offered a number of different game modes. You can opt for a single game, championship, or time trial. These offer slightly different play styles depending on your mood. There is also an option for multi-player, however it appears this only supports games on your own local network. There doesn’t seem to be any options for multiplayer via the Internet. This is a disappointment, as I’m sure there would be some that would like to play online.

I’ve done most of my testing playing single races. This is very easy – you start your game, choose your car, choose your track and then start playing. It should be noted that you only start with one track unlocked, but as you gain experience, you get to unlock the others. This was one thing that confused me a little, as when the tracks unlocked, there was no indication of how this was achieved.

When I started playing the game proper, I initially found that it took one or two games to get used to the controls. If you don’t steer correctly, then the steering is really sensitive. It takes learning the correct technique to avoid over-cooking your car on almost every corner.

The aim from there is to do three laps, and the idea is to beat as many people as possible.

There are plenty of power-ups littered all around the track, and these are also ridiculously fun. They’re not ed so you don’t get to control which one you get, but it is fun to find out what all the power-ups are sand find out what damage they do your opponents.

There really isn’t much more to it than that. The game is silly and fun, and it’s easy to get caught up in the game. I tested the game as part of a Twitch stream, and it was easy to lose track of time. Two hours passed as if it were nothing. Everyone was having as much fun watching as I was playing. I could really see myself sinking a lot of time into the game and I found it was very easy to lose track of time as you immerse yourself further into the game.

Really the only thing that was disappointing was the lack of online multiplayer. This really needs to be a thing here, as I could see the game becoming quite a hit among racing fans if this option were to be included. 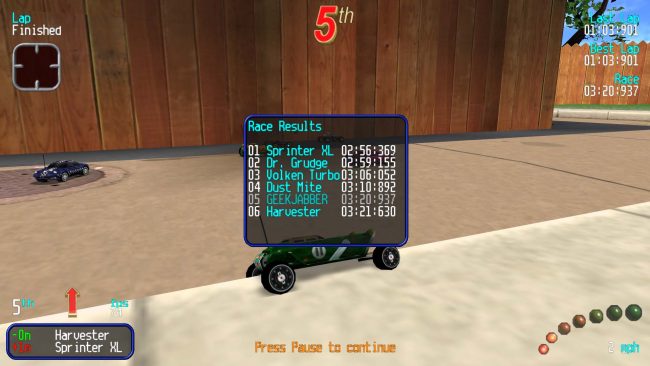 The graphics are nothing short of incredible. They’re not super-detailed, but then with this style of game, that’s not really the point. This style of game tends to really suit ‘simple, but effective’ as the focus needs to be on the action rather than the stunning scenery. I think they’ve nailed it and got the balance perfect.

This is very impressive, given the specs cover equipment that you would have been current 15 years ago. It’s simple, effective and suits the game perfectly. This can be held up as an example of how to do graphics well when targeting lower-end hardware.

This is exactly what a racing game should be. Simple, fun and uncomplicated. This game is definitely all three. It has decent graphics, and while it took a few games to really get the hang of it, the game is a lot of fun once you do. The graphics are incredibly well done, particularly given the low system requirements.

The only criticism is the lack of online multiplayer, wich I hope can be rectified as part of an update.