Anybody who knows me, or has followed earlier articles on this site, knows I have an appreciation for vintage computer technology. I’m particularly referring to technology from the 80’s and early 90’s which is the equipment I grew up with. The current retro revival definitely has not escaped my attention.

Retro Kart Rush was a game that captured my attention because it seems to recreate the nostalgia of the old 16-bit consoles that brought us such classics such as Mario Kart and Sonic the Hedgehog. I thought it a worthy addition to my collection to see how well it could capture that nostalgia.

Retro Kart Rush is a relatively simple racing game. When you launch, you will need to choose which character you want to play. Once you’ve chosen, you have two game modes to play with: time trial or cup. Time trial, as its name suggests, is where you try and get around the track as fast as possible. Cup mode is where you participate in a series of races and the person with the highest points wins.

Going into the game, the first thing I noticed was the car was a little bit faster than I was expecting. I got used to it very quickly, however it did catch me off guard a little at first.

As is common, there are a number of difficulty levels you can also select depending on how difficult you want to be on yourself.

When you get into the game, it has a fun couple of features. You do get ‘powerups’ of sorts left over the map. These allow you to do things like slow the other players down, or freeze them entirely. These can be fun to deploy to strategically to annoy your fellow players. This does give a level of fun to the game.

One thing I did note was the game supports split-screen as well as online play. I haven’t really been able to give these a thorough test, so I can’t really comment on how well these features work.

The parts I have been able to test are very solidly put together. I don’t ever expect this game to ever get to the same league as something like Mario Kart or Sonic. However, as a fun little game to capture a bit of nostalgia for those that remember these consoles, it actually does very well. Noting that it can take a bit of time to get used to the speed of the vehicle, the game easily capture the overall look and feel of the classic NES-type consoles. It can also be a way of introducing younger people to the types of games these platforms had while playing them on modern hardware.

Would I sink hours into this? If I could get enough friends together to do online play, I possibly could. I think this is where this game will shine – basically trying to create a “party game” type atmosphere amongst people that remember the old consoles. As a single player though, it might be fun for a few games and them could get a little repetitive. 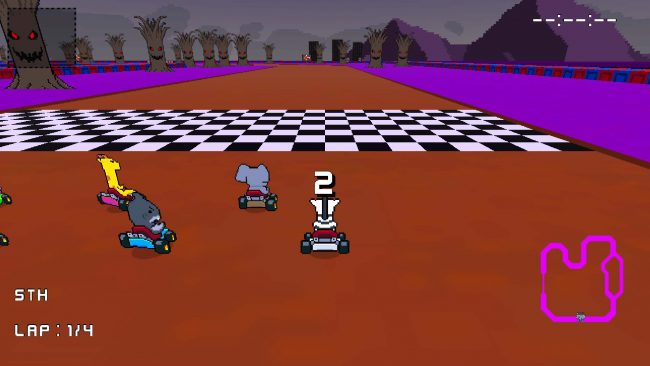 The graphics for the game are actually really quite good, given what it’s trying to capture. It’s not going to win any awards for realism, but I doubt they ever intended to. It was designed to create an illusion similar to what you would have got with the old consoles like the NES.

It is very slightly over-simplified and I think it could use a little extra detail. Having said that, it otherwise captures most of the look and feel of the old NES consoles. It might disappoint a few people with the level of simplification, but given the aim is to create the nostalgia of the early consoles, I think it almost gets there. They may have just very slightly underestimated what those early 16-bit consoles were capable of and have taken the simplification just a bees dick too far.

There are many of us of a certain generation that remember the good old days of gaming, when games were simple and it was about just having some good old-fashioned fun. I think Retro Kart Rush does a good job of capturing that nostalgia.

It might get a little bit repetitive as a single-player game. It would definitely work a lot better if you can get friends involved. But given retro-gaming is becoming a huge thing again, I think it’s good to have a couple of ‘modern’ retro-inspired games to have options for those that want that nostalgia but don’t want the hassle of emulation or running original hardware.