The Real-Time Strategy genre of games have been popular for some time. Age of Empires 2 is the one that people remember as the one that popularised the genre and is one of the earliest examples. It was the more popular version of the game as it was slightly more polished and had considerably more marketing behind it. Some even credit Age of Empires 2 as contributing to how they learnt history.

The basic principle of Age of Empires 1 is very similar to Age of Empires 2. You will need to build up your village, use your villagers to secure your supply of resources, and build up an army. As the game progresses, you will be able to upgrade various units.

Once you’re ready, you’ll be able to send your army out to invade other bases. The goal at this point Is to then try destroy all your enemy bases, at which point you will be declared victorious.

One thing that is still an issue is the pathfinding. When you move some of your units, they sometimes take a very unexpected path to reach their destination, sometimes even taking a very long detour. It means you sometimes have to get a little creative to get your units to their intended destination in the most sensible way possible. This does sometimes detract from the gameplay, as you become side-tracked trying to place your units correctly.

Given the game was originally released in 1997, the game otherwise holds up extremely well. You’d expect that given this is the series of games that started the genre. You will need to develop your strategy to get most out of this game to ensure that your resources are secure and you are able to successfully defeat your enemies.

In terms of gameplay, despite being a quarter of a century old, the game could still hold its own and could pass as a modern game. This is even more so with the improvements with the Definitive Edition. The fact that it now integrates very well with the services provided by Steam makes it significantly easier to set up multiplayer games, meaning that you don’t have to worry about setting up port forwarding or other complexities that would have plagued you in the earlier versions of the games. 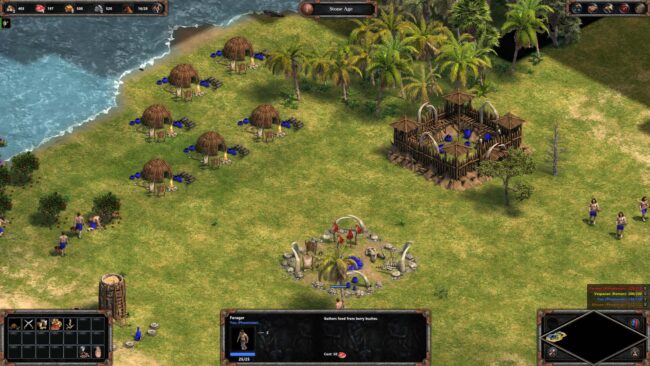 The graphics have been significantly improved with the Definitive Edition of the game.

This is one of the reasons I think it could now pass as a far more modern game despite the original game being nearly 25 years old. The graphics could hold their own even now, and is definitely improved and modernised while retaining the character of the original game. I doubt very many computer games could still hold their own a quarter of a century after their first release.

The Age of Empires series of games have been credited with helping the Real-Time Strategy genre of games increase in popularity.

The Definitive Edition of Age of Empires shows that this game is still a brilliant example of how you can make this genre work. If you’re looking for a game to get your feet with this genre of games, it’s a toss-up as to whether Age of Empires 1 or 2 would be the better example.

The Definitive Edition is technically a new version of the game but given it is essentially the same as the original game, now 25 years ago, it still classifies as retro.