I must admit I am a little bit spoiled coming into this review. I never had my own copy of Carmageddon growing up, however when Carmageddon: Reincarnation was released a few years ago, I invested in a copy. This is a completely modern remake of the original game intended for modern systems. To solve a little bit of confusion, while this was originally released under Carmageddon: Reincarnation, it now seems to go under the name Carmageddon: Max Damage. I can confirm these are the same game, Max Damage just a rebranding of the game.

Given I was only able to play the game on other people’s machines back in the day, I thought it worth revisiting the original game to see how it stacks up today.

Carmogeddon is a car racing game with a bit of a twist. In some senses, it is a traditional car racing game in that you participate in races. The twist is that you want to try and run over as many pedestrians as you can and try and take out your opponents by trying to ram them, crash into them or otherwise try and destroy their cars.

This is where the fun comes it. This level of destruction adds a whole level of competitive behaviour between participants. Of course, it goes without saying that this means the game is probably not suitable for children.

One thing you will want to make note of is the controls. The controls for the original version of the game are very non-standard compared to modern games. This will probably catch you out the first time you play and it’s worth taking some time to customise them to your liking before you start. It caught me off-guard at first given I hadn’t played the game in years.

The game itself was originally banned in the United Kingdom and Germany for being far too graphic. Of course, this just adds to the entertainment for those wanting games with more graphic violence. Again, this makes the game most likely unsuitable for young kids, but for those who enjoy a bit of graphic violence this game can be a great release. 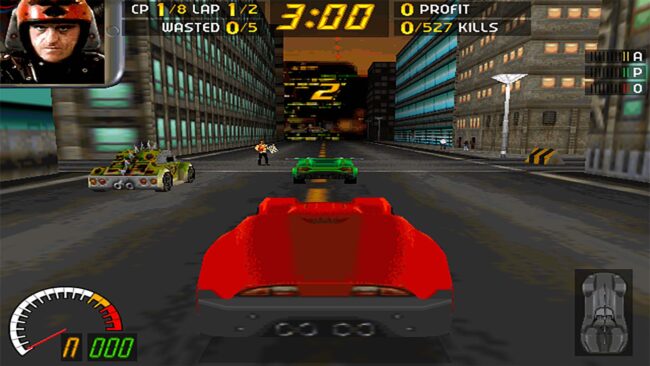 This is where I admit I am most spoiled by having played the remake. The graphics on the original version cannot hold a candle to what is possible on the remake on modern hardware. It’s hard to remain objective having played both versions, and there’s also a risk that it only proves the power of nostalgia has to remember the graphics being better than they were.

I think there is a little bit of that here. This is the original game, and it of course cannot handle the resolutions that current hardware is capable of. The game is stuck running in 640×480.

It is difficult to remember that, in the context of the hardware of the day, this is actually a quite impressive level of graphical details. The lack of standardisation amongst different graphics chip manufacturers when it came to 3D acceleration meant that it was difficult to get games working well in high-resolution across all hardware, so compromises were often made. This likely contributed to the decision to run at 640×480 as it would help improve the experience across a wider range of hardware. With this in mind, the game still works really well.

Having said that, if you’re looking at this from a purely nostalgic point of view, the original version of the game works well and is still quite a lot of fun to play. My only comment is that, having played both versions of the game, it is painfully apparent that the mess that was 3D acceleration on the PC platform in the 90s meant that compromises were sometimes made to provide good performance across all supported hardware.