Those that were around n the early 1990s might remember of the original Day of the Tentacle. It was a fairly popular point-and-click adventure game of the time that gained a reasonable following. It was definitely a game I wish I had back in the day. It was one of the earliest games to take full advantage of the CD-ROM drives that at the time were gaining widespread acceptance on the PC platform.

What people might not know is that back in 2016, a remastered version was released. The underlying game was largely unchanged, but there were significant improvements to the quality of the graphics. For Retro Week, I think it’s worth reminiscing about a game that was known for adapting to the new hardware of the time in the PC world.

Day of the Tentacle is a simple point-and-click two-dimensional adventure game. The storyline is fairly straightforward. You are immediately introduced to Green Tentacle and Purple Tentacle. Purple Tentacle drinks some toxic sludge released by mad scientist Dr Fred Edison. This causes Purple Tentacle to develop a taste for world domination. Dr Fred tries to resolve the situation by killing both the tentacles, but Green Tentacle sends a plea for help to his nerdy friend Bernard Bernoulli. Bernard travels to Dr Fred’s mansion with his friends Laverne and Hoagie to try and sort the situation out.

You will take control of the storyline once they arrive at the mansion, and you are guided through the storyline using a simple point and click interface.

Some people might find this style of gameplay a little slow, but in the case of Day of the Tentacle it has been done particularly well. It feels a lot more natural than a simple paragraph of text could really describe. I suspect it stems from trying to provide an interface to allow you to follow a story and simplifying it to suit the capabilities of the computers of the day. It works a lot better than you’d think. While there was a lot of change in the hardware capabilities around this era, trying to shoehorn something like this into a 3D setting would likely have been technically infeasible.

The whole experience feels really quite smooth, even by today’s standards. You still feel extremely engaged with the story, but you also get a rather chill relaxed vibe out of the game. It’s not a game where you’d expect, or even want, fast-paced action. It’s story telling done really quite well. The storyline is extremely engaging and has been written particularly well. 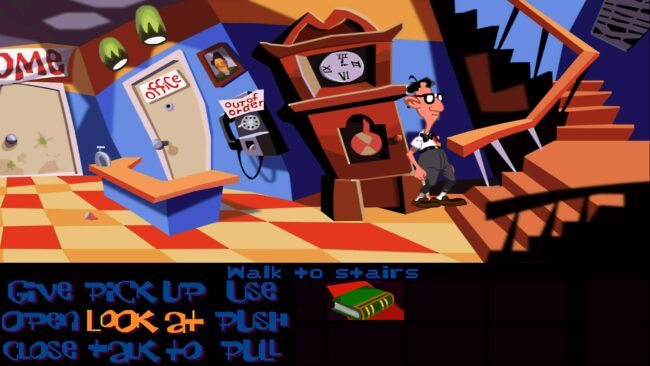 The graphics were very well done given the limitations of the hardware of the day. The slow-paced nature of the game allowed the developers to include a bit more detail without taxing the hardware beyond what it was capable of.

The graphics in the remastered version have been improved. They’ve got more detail to them, but still retain the character of the original graphics. If you’re going to be remastering a game such as this, it’s important that this is done well. You want to retain as much of the character of the original game to appease people’s feelings of nostalgia, while realising the potential of significantly newer hardware.

The remastered version of Day of the Tentacle is really an example of how you can remaster a game well. It retains the character of the original game, while making tasteful improvements to make use of the more modern hardware.

Being able to go for the original graphics is a nice touch to appease those that want to go for a full-nostalgia experience.

The game itself still holds up fairly well to modern standards and would be a really good addition to those that want a retro experience on modern hardware.