Violence in video games in some quarters is a very controversial topic. Most of us realise that everything that happens in a video game is fake and can tell the difference between fantasy and reality. There are some that still insist that violence in video games will be the death of society. If you’re this type of person, I promise this game is kid-friendly where all you do is go door to door delivering the mail!

I do feel a little bit odd reviewing this game. Not because of the game itself, but because it is strictly speaking another remake of a classic game. Some people won’t think that reviewing this is truly “retro”. I would argue somewhat differently. A tasteful remake of a classic game is still retro in the sense that the underlying game is still essentially the same as the original. There are just improvements to make better use of the newer hardware, as well as on occasion improvements in online multiplayer which means you don’t need to dick around with port forwarding and learning the difference between your public and private IP address to play online. This gives some of these older games a new lease o life.

Before we dive in, it should be noted that while the remake of the game is $12.95, the original version of the game can be downloaded for free from Steam. The remake is being reviewed here, though I also link to the original game in the sidebar.

I come into this game not having actually played the original. I didn’t hear about the game until several years after it was released when a group of us were discussing the merits (or not) of banning excessively violent video games. In that sense, I don’t have the frame of reference of the original game.

The storyline is about as simple as it gets. You’re playing a character called The Postal Dude who is angry because he’s been evicted from his home. The goal is to shoot …. well everybody, that is if they don’t shoot you first. you’re basically engaging in the video game equivalent of a mass shooting.

Aside from the fact that there are multiple different levels, there’s not a lot more to it than that. The whole purpose of the game is to kill. This is what the game was known for back in the day, and why it frequently came up in discussions about graphic violence in video games.

I’m one of these people that isn’t so concerned about the level of violence. I perhaps wouldn’t recommend it for younger children, but there are several genres of games that glorify violence and killing in one way or another. Postal is no better or worse than several other games I could name.

There are a few games that I have on rotation that involve some sort of violence. If you’ve had a long day, I find taking it out on a few pixelated monsters with friends can be quite cathartic. In this instance, while you’re not shooting monsters, I find it has that same level of cathartic release. It delivers it in spades. The big difference is Postal puts it into the context of a mass shooting which, understandably, some people may be uncomfortable with. If this describes you, this game may not be for you.

It also has multiplayer options, where you can have up to 4 players picking up weapons. Depending on what time of day you look, you may not find many random games to join. Get a few friends together and you might have a bit more luck. 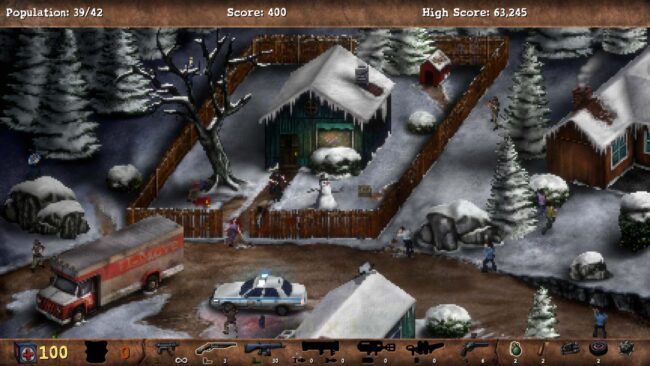 The graphics are obviously an evolution of what was in the original 1997 game. It can sometimes get a little busy. When you first start it can sometimes be difficult to work out which is your character and where he’s shooting, though you do pick that up fairly quickly.

One of the nice touches is that you are able to set different Effects which give the game various different looks. It’s a bit of a gimmick in that some look far better than others, but it’s still a bit of a nice touch.

What I like about a good remake is that it retains the character of how the graphics would have been on the original game while making subtle improvements that better hardware allows. This remake does seem to achieve a sensible compromise between these two.

While the concept of the game is graphic violence, it should be noted in some senses this game is fairly tame. While you are out killing everyone in sight, there isn’t quite as much blood and guts as something like Doom or Quake. I suspect this was a deliberate decision to push the limits of what they could get away with without crossing the line. In Postal, the concept is far more graphic than the graphics.

The Postal series of games will definitely not be to everyone’s tastes. The level of violence may put some more sensitive people off, particularly those that are upset at the thought of a fake mass shooting.

Having said that, if violent shoot-em-ups are your type of thing, you could do far worse than this game. It’s a retro shoot-them-up that can provide a good cathartic release if that’s your thing.